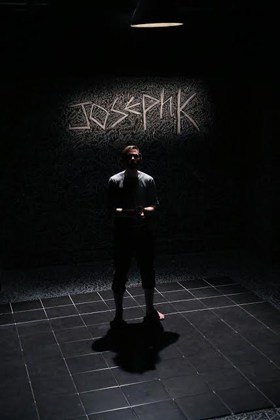 “Someone must have maligned Joseph K. because he was arrested one morning without having done anything wrong.” words that start a famous novel by Franz Kafka. The novel, first published in 1925, has been adapted and turned into a one man play by Howard Colyer, called The Trial and is currently playing at the Brockley Jack Studio Theatre.

In a dimly lit cell, Joseph K (Brendan O’Rourke) is talking to himself. Well in many ways, he is talking to the walls of his cell and his monologue with them covers two main subjects. The first is his arrest one year ago today and the second is his continued lack of a breakfast. Of his arrest, and subsequent trial, Joseph K can only give the barest details. His knowledge of his arrest can be summed up in one sentence. On the morning of his thirtieth birthday, he was unexpectedly arrested by two unidentified agents from an unspecified agency for an unspecified crime. As he tells his story, the listener understands more about his predicament, although like Joseph K you never really get any closer to knowing or understanding why he finds himself in this single man cell talking to the walls.

I have to say that aside from anything else I was really impressed with Howard Coyler’s adaptation which managed to take a fairly lengthy book with twenty six characters and scale it down to a sixty minutes, one man performance whilst keeping the essence of the story and especially Joseph’s character intact. I really liked the fact that Howard kept the story both non-time and non-country specific so that the events that happened to Joseph could have happened in any time and place. We could sit and think this sort of thing – people being arrested and taken off the streets for no known reason – doesn’t happen here and now thankfully. Yeah, anyone remember extraordinary rendition? I think my one small criticism was that the play’s ending was a bit sudden and slightly ambiguous, leaving it up to the watcher to decide what happened next. For some reason, I felt this play really needed a tighter, more decisive ending.

I loved Brendan O’Rourke’s portrayal of the jailed Joseph. Very intelligently played, Joseph came across as a really lovely man caught in circumstances that were beyond his understanding. At no time, did the character ever seem to be feeling sorry for himself as he tried to make sense of where his world had gone awry, instead, relying on his personal mantra “Someone must have maligned Joseph K. because he was arrested one morning without having done anything wrong” to remind him that he was an innocent man and give him hope that eventually the justice system would sort itself out and recognise this. This was a masterly performance by Brendan who, as he talks in flashbacks, introduces us to various people associated with his arrest. Using his posture and a variety of accents to bring his interlocutors to life, sometimes switching back and forth between characters amazingly fast, Brendan’s performance adds another layer of depth to this fascinating play.

All told, I thoroughly enjoyed The Trial. Whilst I could identify with Joseph’s story, there was almost a sense of relief and ‘there but for the grace of God go I’ as the narrative unfolded which made me very glad I live in a civilised country where things like this just do not happen. A fascinating story, excellently executed and well worth seeing.

Someone must have maligned Joseph K. because he was arrested one morning without having done anything wrong.

The successful and respected Joseph K. is arrested on his 30th birthday, but for what crime?
Howard Colyer returns to the Jack with Kafka’s The Trial, adapted as a dramatic monologue. Colyer’s re-imagining of this famous text places K. in his prison cell one year on from his arrest. Within the confines of these four walls he grapples with the confounding events which have driven him to the brink of insanity and now leave him facing possible execution.

Directed by Saul Reid and performed by Brendan O’Rourke

This play was first put on at The Mill at Sonning in early 2010 - the world has, of course, changed significantly since then, and the script has been … END_OF_DOCUMENT_TOKEN_TO_BE_REPLACED

It’s easy to see why the Orange Tree has brought this one back for another run, less than a year after its first outing here. This is a bold, … END_OF_DOCUMENT_TOKEN_TO_BE_REPLACED

I always loved Choose Your Own Adventure books. Definitely not the Steve Jackson ones where you had to roll dice (who did that?) to find out whether … END_OF_DOCUMENT_TOKEN_TO_BE_REPLACED

Well, there’s a bit about Pablo Picasso’s (1881-1973) paintings in this show that bears his name. But it’s mostly about his approach towards women. … END_OF_DOCUMENT_TOKEN_TO_BE_REPLACED