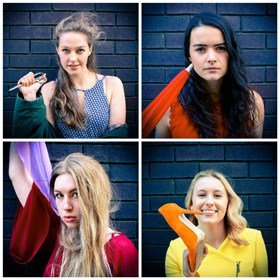 It seems innocent enough: four girls wait anxiously to appear on the latest reality TV game show. It’s like Take Me Out or Blind Date – but with much higher stakes, because if contestants, who are always female, don’t get picked after three appearances, they get taken away and brutally mutilated in a procedure that they may or may not survive. And if they do win, they have to marry whoever picks them, regardless of their own feelings. It’s all part of a compulsory government programme to slow population growth and create a ‘premium race’, and for two of the contestants, Esther and Nicky, today is their last chance to ‘win’.

Unnatural Selection by OPIA Theatre is an interesting and stark juxtaposition of funny and horrific. On one level, it’s a character study of four very different girls placed in competition with each other, with all the awkwardness and bitchy humour we’d expect to find in such a situation. On another, it’s a satirical take on dating shows that encourage judgements based solely on first impressions, and, briefly, a discussion about our obsession with social media. There are some laughs – but they’re short lived once we realise that around the next corner we may be subjected to a far too graphic description of female genital mutilation. So we end up with tension on two fronts – the social awkwardness of the four rivals sizing each other up, and the knowledge that for some of them, a horrific fate awaits. This tension is convincingly portrayed by the four actors – in Rhianna’s inappropriate chatter and constant eating, Esther’s anxious fidgeting, Nicky’s determined silence and Bella’s sharp put-downs.

Though each character gets her moment in the spotlight, the story focuses primarily on the battle of wits between intellectual Esther (Katherine Thomas) and blonde princess Bella (Natasha Grace Hutt), neither of whom is quite who they appear to be. Perhaps it’s no surprise, then, that these two seem to be the most developed characters, while Nicky (Holly Connell-Wallace) and Rhianna (Masha Kevinovna Waring) remain a bit of a question mark throughout. Rhianna in particular is clearly a complex character, at once intensely annoying and strangely appealing; it would be great to find out what her story is.

The dystopian premise is a feminist’s worst nightmare, in which women have just two minutes to convince men of their value – and it’s pretty clear that the intellectual content of their presentation isn’t what usually gets them picked. Fortunately, we’re not asked to believe that everyone’s accepted this situation without question; the whole reason the girls are in the waiting room at all is because a feminist group has invaded the studio and caused a disturbance. And the sad truth is the story is based in reality – the TV show may be fictitious, but FGM is still a horrifying fact of life for women all over the world… even here in the UK.

Unnatural Selection is a clever and intriguing story, which does well to squeeze a lot of different issues into a little under an hour – among them female relationships, gender equality, FGM, technology and social media – as well as establishing the back story of an oppressive government and the TV show itself. This does mean each of the issues only gets a very brief treatment, so it’s not entirely clear which is meant to be the main focus; perhaps concentrating on one or two themes would allow further development, and give us time to get to know the characters in greater depth. Nonetheless, this is a promising piece with great potential by four recent graduates from the Guildford School of Acting, who clearly have a bright future ahead.

A dark, political comedy questioning the world in which we live; Four women, four rivals, imprisoned in a waiting room, moments before they go on National Television. The drab waiting room becomes a battleground of desperation and fierce competition for the unrepresented. Each character is pushed to confront her worst flaws, with an ending to play on the minds of the audience. Unnatural Selection slides between poignant humour and harsh reality.

Formed by four Guildford School of Acting graduates, OPIA Theatre Company sets out to voice issues that aren’t spoken about in the Western World. Or, are spoken too much about that people completely brush them aside as an issue.

Unnatural Selection speaks candidly to the audience about many issues, most importantly, Female Genital Mutilation – an issue that has been on a shocking increase around the world, in particularly London. OPIA feel it’s important that FGM isn’t just labelled as one culture’s problem; it’s the whole world’s problem.

I wouldn’t exactly say Ben Forster appearing as himself in this musical comedy is a career highlight (he is, after all, someone who has played the … END_OF_DOCUMENT_TOKEN_TO_BE_REPLACED

It’s an intricate plot, laced with some subversive humour - that the female character is simply called ‘The Woman’ (Molly Lynch), for instance, is … END_OF_DOCUMENT_TOKEN_TO_BE_REPLACED

Andrea McArdle didn’t, when the 1978 movie Rainbow was released, look or sound like Judy Garland, and she still doesn’t. You’d be forgiven for … END_OF_DOCUMENT_TOKEN_TO_BE_REPLACED

TENNIS ELBOW is the first play that John Byrne has written for thirteen years, and is in fact a companion piece to his critically successful Writer’s … END_OF_DOCUMENT_TOKEN_TO_BE_REPLACED

It’s all a bit banal, really - or perhaps I’m too heavily influenced by some of the other online productions that I’ve seen recently, which deal with … END_OF_DOCUMENT_TOKEN_TO_BE_REPLACED