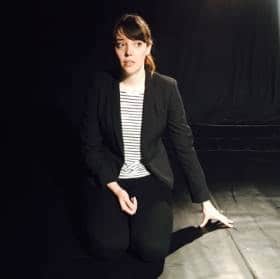 On entering there is an open set containing a single chair and a black and white background. There isn’t much else, but nothing else is required – the performance, writing, lighting and sound do an excellent job of moving you to where you need to be without the need for an actual set change. The movement between different scenes is separated by use of good lighting and the clever use of sound with a deep rumble signifying the “scene change”.

The play consists of being taken on a journey, albeit removed from the linear progression of time, through the events leading up to what appears to be the worst moment in Rachel’s – played by Maddie Rice – life. Rachel has a well-paid sales job but gets fed up with it only being about the money and feeling like she should be doing more to help people. She moves into social work so she can give more back, only to find that the cases she receives instil her into the lives of people that leads to an awful turn of events. Throughout the play, more details of the events and Rachel’s experiences unfold explaining why she is being hounded by the paparazzi.

Rice delivers an exceptional performance transitioning between the different emotions from the varying situations she finds herself in with an ease that belies the difficulty associated with it. Rice will nearly be in tears for one section and then in a beat is cracking jokes and having a laugh in the next scene having moved environments even though that is only within the narrative. Rice has a natural ability to convey emotions that are in turn felt by the audience. I will be surprised if you don’t leave having laughed, felt sympathy and having been given a realistic insight into what it must feel like to be constantly hounded by the paparazzi. Rice has a fantastic variety of believable accents that are used to good effect throughout – as someone who cannot do a single accent convincingly, I am quite jealous of this!

Martin Murphy has written an excellent script. Much of it was done as a single-sided story-telling monologue with snippets of one-sided conversations which were believable and fit well. Murphy’s ability to quickly put you in the person’s shoes and have you experiencing what they must have been feeling can only be commended. Yes, this is complemented by superb acting from Rice and as a team, I hope they work together again soon. I will be looking out for something either of them has a hand in.

Should you see it? If you have the time, then yes definitely. The King’s Head Theatre is up there on my list of places to go to see an excellent production and Villain by Martin Murphy certainly lives up to this.

Rachel is a woman who just wants to make a difference. Tired of her highly paid sales job, she makes a move into social work. Visiting Marcia, she seems like a good person whose naivety has led to an unfortunate series of relationships and children – but you’d never guess anything was the matter. Not until it’s too late, and Rachel finds herself at the centre of a controversial case with a catastrophic conclusion.

Trapped in the media’s unforgiving gaze, she is hounded across social media with vitriol and blame – but is Rachel really the villain of the piece?

Brutal, topical, and darkly funny, Villain follows Rachel through her twenties in a story that will be familiar to many. With echoes of cases like Baby P, Victoria Climbie and Liam Fee, Villain lets the social worker tell her side of the story in a devastating hour that questions whether we can still try to do good or if the risk to ourselves is just too high.