You are here: Home / Reviews / Review of Wait Until Dark at Richmond Theatre 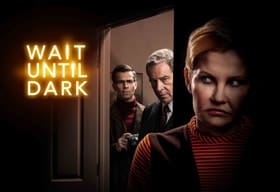 Everyone’s afraid of the dark to some extent; It’s unknown and it’s where the monsters hide. But has anyone ever stopped to question, can a monster fight in the dark? Frederick Knott’s Wait Until Dark is a psychological thriller that has enthralled audiences since its debut in 1966.

Set in distinctive 1960s London, the play follows the plight of Suzy, legally blind and left alone in her apartment while her partner is away on business. What was initially an evening at home soon turns to horror when Suzy finds herself falling victim to a group of conmen. Believing she’ll be an easy target, the men hatch an elaborate plan, however, their folly is their gross underestimation of her, particularly when the playing field is levelled.

As a whole the production is brilliant. Attention to detail in terms of set and lighting is superb and the soundscape is on point, leaving you thoroughly disconcerted and uncomfortable. The premise of the production creates an instant challenge for the creative team, how do you light a show that is intrinsically based around darkness? Chris Withers meets this challenge superbly with an elegant contrast between blinding lights and unsettling blackouts. Furthermore, the underscoring, an essential element in any horror or thriller, succeeds in creating a foreboding ambience reminiscent of the unsettling underscore of infamous works such as The Exorcist or Rosemary’s Baby.

Unfortunately, the subtleties end with the production value and in many instances, the sincerity and intensity of the suspense are undermined by melodrama. This is particularly relevant for the physicality of the piece as there are multiple occasions where it seems all action halts for a physical manoeuvre, such as a fall. Notably the fall on the staircase seemed more appropriate for a pantomime and, in all honesty, I took it to be a plot device where the intruder was ‘faking’ his fall as noisily as possible to trick the protagonist. I only realised it was a legitimate death scene somewhat later when the body was removed on stage.

The clear draw card for this production, other than the enduring legacy kindled by the 1967 film adaptation starring Audrey Hepburn, is lead actress Karina Jones. Registered blind at the age of 13 she is the first visually impaired actor to take on the role, which is sure to add an element of authenticity and sincerity to the production. It’s clear that it’s no easy feat navigating such a detailed set containing not only an ever-changing landscape of props but also a giant staircase, however, the authenticity of her performance is undermined by the prevailing atmosphere of melodrama, compounded by shrieks and overly dramatised exchanges. This does improve considerably in the second act, however, as a whole, the melodrama can really be toned down.

It’s disappointing that a production which, on one hand, nails the art of subtlety manages to overdramatise key elements of the script. While the genre does require a degree of excessive emotion, the production needs to trust the essence of the script and settle into the performance because, in its current state, it seems somewhat lost in the darkness.

The Original Theatre Company in association with Eastbourne Theatres present Wait Until Dark.
From the hand of Frederick Knott, author of Dial M For Murder, and the producers behind Night Must Fall and Birdsong, comes a major revival of the classic thriller, Wait Until Dark.

Set amidst the social turbulence of 60’s London, the play follows the story of Suzy, a blind woman who, left alone in her apartment, becomes embroiled with a group of conmen hatching an elaborate scam. As the tension notches up, Suzy is left to fend for herself but with the phone line cut dead and the house plunged into darkness, can she outwit the murderous visitors? Wait Until Dark, made into a film starring Audrey Hepburn in 1967, is often ranked as one of the top 100 scariest films of all time and this exciting production is sure to reclaim it for the stage!

View all dates for tour