Home » Reviews » Review of What Worries me at The Red Hedgehog 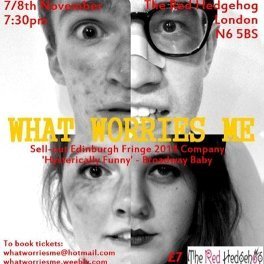 What Worries Me at The Red Hedgehog in Highgate promised ‘unrelenting laughter’ – and boy did it deliver! From the moment the lights came up on Aidan Peppin  as Julian – the blood-bespattered, dressing gown-clad, slightly neurotic, naïve, entitled, upper class boy about town who four hours since stabbed his stalker with a four inch blade – I was creased up in laughter. The plot follows Julian and his best friend Hector in their attempts to rid themselves of the corpse on Julian’s living room rug. They are abetted by the compulsive liar ‘Postwoman Molly’, played by Becky Horgan, and certainly aided by the incompetent Officer Felix and her offstage assistant Patrice.

The marvellously quippy writing by Oliver Clark is honest and totally unpretentious – from pulling a corded phone from the pocket of the late Doug Freedman (the corpse) to exploring the Francophobic/Francophilic hilarity bound up in the lovely characterisation of Becky Rourke’s Officer Felix (think an Officer Crabtree for 2014), the comedy self-reflectively deals in laughs garnered from parody of murder mystery – but in reverse. Nothing is predictable. Our heroes are the criminal perpetrators and, with the fourth wall often dismissed, we are the co-conspirators.

Reece Connolly playing Hector was such a treat. His unputdownable optimism and innate, somehow blameless snobbery, locate him somewhere in the triangulate geography of Michael Machintyre, Wilde’s Algernon and Will from The Inbetweeners. His slapstick is not aggravating but hellishly funny. This venture is a second offering from the theatrical team behind a sell out Edinburgh show entitled Hold For Three Seconds. As the titles suggest this is a (as yet unnamed) theatrical troupe who tackle the whims of comedic creativity head on and aren’t afraid to use them unabashedly. One of the funniest themes was the Officer Felix-led investigation into ‘ze merder’! The play unashamedly follows a history of British comedy in the tradition of Jeeves and Wooster and Are You Being Served – and it translates splendidly for 2014. The laughter was a tonic and I left feeling somewhat delirious.

Viewers will need a little patience with the venue – but it is absolutely worth it. Arriving in the rain just before the performance began, all seemed shut up and abandoned and it’s an unprepossessing performance space.  You can take shelter in The Boogaloo just over the road before performances. A conversation with Clare, the builder of the space, informs me that there are lovely plans afoot but in the meantime it does exactly what it should be doing.  The Hedgehog embodies, to my mind, exactly what fringe theatre and start up venues should be – a space for flexing the developing and absolutely must-see muscles of emerging talent.

The only downside of this play is that it was only on for two nights. They are sure to get a big following on the London fringe scene and I do hope they resurface very soon because I for one am a big fan and I can’t wait to see more.

What Worries Me was at the Red Hedgehog Theatre on the 7th and 8th November in Highgate.

If the audience were to be exposed to full versions of the seventy-four songs listed in the programme, it would be a very long show indeed. I suppose … END_OF_DOCUMENT_TOKEN_TO_BE_REPLACED

How can a play be both charming and devastating? Through its tight script, abundant humour and pitch-perfect performances, 4th Country manages to … END_OF_DOCUMENT_TOKEN_TO_BE_REPLACED

Britain, so a London cab driver once told me, is obsessed with the Second World War, as though it happened just recently. Power Luncheon would seem, … END_OF_DOCUMENT_TOKEN_TO_BE_REPLACED