Home » Reviews » Review of What Would Julie Do? – Soldiers in Petticoats 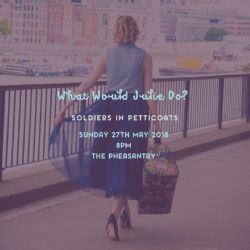 There was a fleeting but nonetheless noticeable silence a few minutes into this latest edition of What Would Julie Do?, a series of live performances celebrating the life and career of Dame Julie Andrews. The irony was not lost (at least, I don’t think so) on the audience on the announcement that a guest performer had to pull out of this musical theatre cabaret because in the precise words used, “she has no voice”. How does one react to that, given what happened to Dame Julie in the late Nineties, when surgery on her vocal cords resulted in the loss of her singing voice?

As the old adage would have it, the show must go on. This show took ‘Soldiers in Petticoats’ as its theme. The short explanation is that it’s taken from a lyric in ‘Sister Suffragette’, a number in the motion picture Mary Poppins (omitted from the stage musical version): “We’re clearly soldiers in petticoats / And dauntless crusaders for women’s votes / Though we adore men individually / We agree that as a group they’re rather stupid!”. The slightly longer explanation, at the risk of giving too much away, is that ‘soldiers’ and ‘petticoats’ are traditionally associated with the male and female gender respectively, but we’re now seeing women on the frontline, and men are being encouraged to ‘open up’ a little more – that is, to display figurative petticoats. That is, in turn, emotions other than anger.

A self-confessed “feminist rant” from host Rosie Williamson did seem to suggest proverbially fighting fire with fire. It was balanced out, however, by highlighting the sheer number of male suicides in Britain on a daily basis because, in part, of a tendency to not seek help with regards to mental health issues (just as there is a reluctance to seek medical attention with regards to physical health ailments). Elsewhere, Williamson rattled through carefully pre-prepared remarks at quite a pace, keen not to waste time – and why not? It may not have been the sort of cabaret show where the host interrupts themselves and starts awkward conversations with people in the front row, but there’s nothing wrong with being slick and polished. You know, like Dame Julie.

A selection from a song cycle called ‘December Songs’ didn’t provide the sort of cheer, albeit seasonal, that such a title might suggest. It was left instead to numbers such as ‘I’m Gonna Wash That Man Right Outta My Hair’ from South Pacific and ‘My Body’ from The Life to raise the roof, the latter being especially timely, Williamson thought, in the light of a recent referendum in the Republic of Ireland, which paves the way for significant reform to abortion legislation. The range of songs – both in terms of content and tempo, was quite impressive, and reminded me of an American tourist’s remarks about the British weather: “If it’s not to your taste, hang in there, buddy. It will change.”

Williamson was joined by Elise Allanson, Lucy Clough, Rebecca Ridout and Joanna Thorne – and if the first half had variety with a capital V, the second was an opportunity for power songs and mellow melodies to reign supreme, bookended by a bolshy Beyoncé number, ‘Run The World (Girls)’, reprised at the curtain call. Some light amusement was found in ‘Times Like This’ from the musical Lucky Stiff, in which dogs are praised for being the perfect companion for a lady. ‘Like Love’, from the musical comedy Charlie Girl, not seen in the West End since 1986, tells an intriguing narrative about a young lady who would rather have even a small percentage of the man she loves than one hundred percent of anyone else.

A brisk but buoyant production, it’s a confident celebration of life and freedom of expression, using show tunes to lift people’s spirits. As they sing in Les Misérables, “Even the darkest night will end and the sun will rise.”

What Would Julie Do? Live returns to The Pheasantry for another evening of musical theatre therapy. Singer, Actress and Blogger, Rosie Williamson has long been compared to Mary Poppins, but outward appearances can be deceiving: She is, like most of us, far from practically perfect in every way. Rosie often takes hypothetical advice from the guru of musical theatre perfection, the superstar, the legend that is…Dame Julie Andrews. Whenever she is in a stew, she asks: “What Would Julie Do?”.

Catch Me is a new musical written by Arnoud Breitbarth and Christian Czornyi and directed by Adam Lenson, that debuted in 2016 at the Arts Theatre in … END_OF_DOCUMENT_TOKEN_TO_BE_REPLACED

There are usually, broadly speaking, two large demographics of patrons at a family show like The Wizard of Oz – children and their responsible … END_OF_DOCUMENT_TOKEN_TO_BE_REPLACED

This production makes excellent use of the available stage space - and, rather like the big musicals at Chichester Festival Theatre, has its cast … END_OF_DOCUMENT_TOKEN_TO_BE_REPLACED

This is an enjoyable and dynamic production of Henry V at the Sam Wanamaker Playhouse. Does it matter that there is innovative action and that it is … END_OF_DOCUMENT_TOKEN_TO_BE_REPLACED