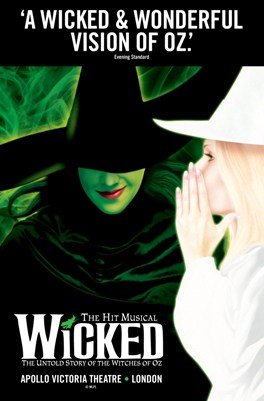 Since it first opened on Broadway in 2003, Wicked has become something of a phenomenon amongst musical theatre aficionados. When “The Untold Stories of the Witches of Oz” opened here at the Victoria Apollo in 2006, audiences this side of the pond had to agree. Since then, it has become a world-wide hit, made huge stars of its first lead actresses and provided half the storylines in the first series of “Glee”. Writing a review therefore is a pretty daunting task. Having seen it myself 7 times so far, I decided that the best thing to do was to take along someone who had never seen it before to gauge their reaction as a newbie. We entered the theatre, saw the wonderful curtain with the intricate map of Oz and then looked up at the Time Dragon standing guard over the stage, and we knew we were in for something special.

The story interweaves itself through the timeless movie and staple of the Christmas viewing schedules The Wizard of Oz but does so in such a way that it adds to, rather than subtracts from, the magic of the film. The set is amazing with scenery gliding around to take the audience on a journey through the life of Elphaba, the green-skinned daughter of the Governor of Munchkinland. We follow her transformation from an innocent, naïve schoolgirl with an unexpected talent, falling in love with the handsome Fiyero (who appears wearing the tightest pair of jodhpurs possible) to the infamous Wicked Witch of the West. Elphaba’s opponent in so many ways is the pretty, spoiled Garlinda (with a Gar) and their relationship forms the backbone of the show. For those that haven’t seen Wicked yet, I really don’t want to give too much of the story away, but the book is very well written. In fact, the way the story pans out, it could be used in schools to teach modern politics and how totalitarianism works. There is comedy, heartache love and deception in equal measure and this is not a show where the narrative has to rely on crowd pleasing tunes for its appeal. Despite that, the music is truly exceptional.

Credit must be given to the entire cast, particularly to my mind, the ensemble who must have some of the fastest costume changes and complex dance numbers in the West End. However, the show relies heavily on the two main characters whose relationship goes from hating each other “Loathing” to being as close as sisters “For Good” and I have to say the actresses currently in the roles (original UK Elphaba – Kerry Ellis and Glinda – Savannah Stevenson) achieve this so well that maybe someone should check if they really are related. Signature song “Defying Gravity” has what is reputed to be the hardest note to hit, the High F, and to do so, whilst flying above the stage with a massive array of lights shining on you takes some talent, but Elphaba pulled it off with ease. Similarly, and this wasn’t something I had ever appreciated before. Glinda’s songs require an actress with a 4 octave vocal range, something you don’t often find even in grand opera. On top of that, she must move your opinion of her from “worst roommate ever” through little miss smug “Popular” to realising the truth about the woman behind the bubbles. Both characters have amazing solo parts, Elphaba has two really awesome songs, but it is when they sing together, that the true relationship between them is obvious.

I had no idea such a movement existed, but it does: pickup artists ply their trade by sharing ideas about how to achieve sexual success with women. At … END_OF_DOCUMENT_TOKEN_TO_BE_REPLACED

If the audience were to be exposed to full versions of the seventy-four songs listed in the programme, it would be a very long show indeed. I suppose … END_OF_DOCUMENT_TOKEN_TO_BE_REPLACED

How can a play be both charming and devastating? Through its tight script, abundant humour and pitch-perfect performances, 4th Country manages to … END_OF_DOCUMENT_TOKEN_TO_BE_REPLACED