There is, as James Thierrée points out, no discernible narrative in this show. At least he had the decency to admit that. Almost immediately, the show was highly expressive, with some impressive physical skills – characters turn into statues and are carted off as though they really were inanimate objects. There’s frenetic activity, with Thierrée seemingly overseeing the construction of a large stage set: when he expresses dissatisfaction with a curt, “No!” a dancer stops immediately and slinks away, dejected, but he is instead unhappy with aspects of the set design, and sets about making alterations. 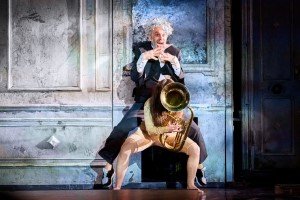 Thierrée is, I think, trying to be as subversive as possible, and it works to some degree, in the sense that the production, which runs a tad too long for a show without an interval, asks questions about itself. Like a stand up comedy gig, punchline gags are repeated later in the performance for maximum comic effect, and the audience at the performance I attended largely lapped it up.

But by starting at such a high octane level, there’s only one viable change of direction, and it comes quite late in the proceedings. It’s a pity the energy levels couldn’t be sustained until the end – going for a bit of subtlety after spending so long being loud and lively comes across as a show running out of steam, limping towards the finish line. A group of ten supporting actors, dancers, singers, musicians – do it all between them (Anne-Lise Binard, Ching-Ying Chien, Mathias Durand, Samuel Dutertre, Hélène Escriva, Steve Eton, Maxime Fleau, Nora Horvath, Sarah Manesse, Alessio Negro) are kept busy, but it all becomes too repetitive.

Perhaps reflecting what actually happens when it comes to putting a show together, Thierrée is often overruled, despite quite evidently being the person in charge. It gets very chaotic at times, with musicians in dispute with one another and, in the show’s final moments, two women indulge in prolonged fighting. Thierrée instructs them to stop (what else is he supposed to do?), but they just carry on. The practice of ignoring Thierrée’s instructions is a running theme throughout the performance, often resulting in loud and confrontational exchanges followed by, if deemed necessary, a long-overdue demand for quiet and civility.

And yet, throwing the kitchen sink and then some, as this production does, has its pay-offs – there’s plenty of live music, for instance, which makes Thierrée consider whether this might as well be a “strange f—ked up musical”, and its all played remarkably deftly. “Where’s the plot? What’s it all about?” Thierrée asks. Well, if he doesn’t know, that I felt under no obligation to even attempt to work it out for myself. The production is as meaningless as the show says it is, except perhaps for a passive-aggressive response to theatre performances (of any given show) being disrupted by a pesky ringing telephone. A strong and talented cast are somewhat let down by a bizarre and unruly script.

In ROOM, Thierrée wants to renew his relationship with his audience. To begin a new chapter. To open the toolbox, dig deep, intensify, magnify, and find joy. To draw actors and audience closely together as only shared experiences can.

Thierrée is one of Europe’s most extraordinary and versatile artists, using his talents to create magical dream-like performances that captivate, charm and inspire. With an unbridled musical ensemble, ROOM takes us on a multi-layered, outrageous journey through his extraordinary world of wonder.

Harold Shipman, known to his many patients, family and friends as ‘Fred’, was Britain’s worst serial killer. The official inquiry into his crimes … END_OF_DOCUMENT_TOKEN_TO_BE_REPLACED

Being one of Arthur Miller’s best-made and most challenging plays, The Crucible is also one of his most frequently performed. I was going to say … END_OF_DOCUMENT_TOKEN_TO_BE_REPLACED

To be fair, Linda Lavin called her concert Love Notes, there’s an album of the same name, and that’s more or less what it was about - variations on … END_OF_DOCUMENT_TOKEN_TO_BE_REPLACED

Noughts & Crosses is a euphemism for blacks and whites. The Noughts are the whites and the Crosses are the blacks. In the world of the play, the … END_OF_DOCUMENT_TOKEN_TO_BE_REPLACED

This ‘juke box’ musical offers highly polished, undemanding, feel-good entertainment, showcasing, as it does, 30 songs dating from the 1960s to the … END_OF_DOCUMENT_TOKEN_TO_BE_REPLACED