Anyone who’s worked in investment banking knows it’s largely an intellectually-free zone, polluted with people who calculate each other’s value according to the price tag of what they own. 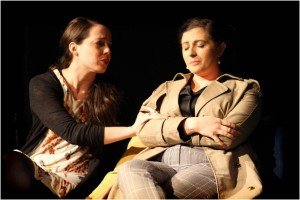 Writer/Director Yasir Senna accurately highlights this in his play Rumble, set in the first decade of the Noughties but with a nod to a world heavyweight title fight between two boxing champions that took place in Zaire (now the Democratic Republic of the Congo).

For those who follow the careers of heavyweights, this historical fight is known as ‘The Rumble in the Jungle’ and the two world-class boxers who slug it out in 1974 are George Foreman and Muhammed Ali.

With this event in mind, we fancy-footwork our way to Rumble and the offices of international banking firm, Deveraux with its quartet of sleazy company bigwigs who – for some unknown reason – pull out all the stops in making life a corporate hell for Commercial Manager Alisha (Claire-Monique Martin).

It seems Alisha has let down her obnoxious boss Peter (Richard Evans), who crudely upstages her in front of a group of Qatar delegates who need convincing that Deveraux is the firm to trust when it comes to managing emerging markets in the Middle East. But Peter ends up with egg on his face when one of the delegates asks to see a
key company profile to support Peter’s boasts and, what do you know, the poorly prepared Peter doesn’t have it. Needless to say, Peter blames Alisha for not including it in his portfolio of information which, in the corporate world, requires extreme punitive measures.

Soon after, Alisha is called in to meet with the company higher-ups who issue her with a written warning, the first of three and with a proviso: her performance will be monitored by the feckless Peter and if she doesn’t shape up she’ll be out on her ear.

Exemplary employee Alisha has no idea what this company grudge is all about. At first, she is all tears and fearful that she and her newly wedded husband won’t be able to pay their mortgage but, after she’s handed a second written warning, she metaphorically dons the boxing gloves and decides to wage an almighty battle against her corporate oppressors.

And this is where Alisha’s continual references to the Ali vs Foreman fight, and her curious mocking of Foreman as bad guy who must be defeated, and Ali as good guy and ultimate winner, do not work.

In Rumble, Alisha takes up the good fight against a cruel, unjust, no-punches-pulled women-hating corporate environment – basically an unequal match between abusive power and the perceived weakness of the worker, especially female.

But the Ali vs Foreman fight is not about good fighting evil. It’s about two world-class champions who slug their way to the top of their game and meet for an historical countdown. These masterful boxers were each other’s equal but, as in any boxing match, there can only be one winner. It seems unfair to equate the legendary ‘The Rumble in the Jungle’ and its two legendary boxers, both raised in a racially unjust United States, against the filthy politics of corporate morons who try to hound Alisha out of a job.

That being said, Rumble does land its punches in highlighting corruption and misogyny in the corporate world, and poses some troubling questions about who survives the battle to the top and whether it’s worth it to stay there.

In a long-forgotten interview with Jonathan Ross, George Foreman said: ‘A boxer has to prepare for brain damage and memory loss.‘ It’s part of the game.

A quote relevant to Rumble and Alisha’s battle with her unworthy opponents. It’s worth seeing the play to find out.

It’s 2009 and the nation is in the midst of a recession. Times are tough and only the toughest survive!
In to the fray steps Alisha Harper-Gill, a diligent professional who suddenly finds herself facing a disciplinary
action instigated by her male bosses. With dismissal impending, the odds are stacked against her and Alisha
has to make a decision. Does she hand in her letter of resignation, thereby saving her reputation, or does she
confront her opponents and Rumble!

If the audience were to be exposed to full versions of the seventy-four songs listed in the programme, it would be a very long show indeed. I suppose … END_OF_DOCUMENT_TOKEN_TO_BE_REPLACED

How can a play be both charming and devastating? Through its tight script, abundant humour and pitch-perfect performances, 4th Country manages to … END_OF_DOCUMENT_TOKEN_TO_BE_REPLACED

Britain, so a London cab driver once told me, is obsessed with the Second World War, as though it happened just recently. Power Luncheon would seem, … END_OF_DOCUMENT_TOKEN_TO_BE_REPLACED