Home » Reviews » Salome by Oscar Wilde at The Space 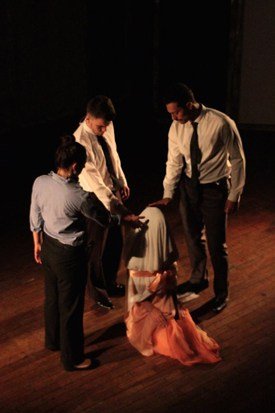 Théâtre Libre has created a sensational presentation of Oscar Wilde’s rarely performed play Salomé (1891) at the tiny space of the Space Arts Centre, yet there are big and ambitious ideas here that make up for the size of its minute stage. Wilde’s biblical precedent of the volatile beauty was banned in London in 1892 and it’s not hard to see why. The succès de scandale is an emotionally charged portrayal of Salome – the daughter of Herodias and step daughter of tetrarch Herod – who requests the head of Jokanaan (John the Baptist) when nature signals an ill fate for the tetrarch and his people.

The stage is cleverly divided. Atop, (positioned like oligarchs,) husband, wife and step-daughter dine together while the soldiers look up at them, symbolising their lowly status in the hierarchy. The hole of the cistern hides the sacred prophet and the main stage unleashes the savagery and obsessions over blood, lust and power. Smaller screens, on both sides of the stage, display the turbulent moods of the moon whilst numerous selfies of Salome on Instagram convey the narcissistic component of her complex character. The percussive sound and music, by Spiros Maus, also play an integral part in the production, adding to the dark presence of powerful forces and the ominous atmosphere looming in the shadows.

Salome’s (Liza Weber) entry onto the stage is a notable one. She is entirely covered in veils (seven of them,) and once her face is revealed she is as vulnerable as a baby just born. Through physical dance she is moulded and shaped into a woman and it is that element of dance that add a delicate and sensual dimension to her. It is with much credit to Théâtre Libre’s director Kaitlin Argeaux for not limiting the focus on the drama of the play but mastering the ability to evoke an engaging and terrifying image of Salome through great support and superb execution of its leading actress.

Weber’s noteworthy acting and vivacious dancing technique, of Justyna Ziarek’s enthralling and multi-faceted choreography, are a thrill to watch. Rolling around on the floor, enticing and tantalising Jokanaan, which fails but works on Herod, Weber evokes the white dove-like feet of Salome and the magnetic gaze that calls to men. Weber finely marks out the blackened and sadistic undercurrents of Salome’s persona that are disguised in her youthful and charming looks. She has a vivacious energy on the stage and is perfectly suited for the role. There’s also an element of Cate Blanchet about her which isn’t necessarily a bad thing!

Christopher Slater as the tetrarch is a force to be reckoned with. He brings out the gluttony, and drunken arrogance of Herod and makes audiences feel like a draught has actually come into the Space theatre when sensing ‘a wind’ and its ‘black wings’ (and no, there isn’t a sign of an air fan.) James Barnes, as Jokanaan, stands out not only in his Old Testament costume (with a wig he could do without) but also in his poetic prose. Barnes has a knack for expressing symbols and mysticism whilst instilling grace in Jokanaan, which he does so fluidly here. There’s also fabulous performances from the accompanying cast including Cheska Hill-Wood, and Sofia Amir, Alex Marlow and Tom Swale as security guards for the rich and corrupt.

Théâtre Libre has taken Wilde’s text to the next level with their gift for physical theatre whilst grappling with movement, prosthetics, visual animation, and lighting. Even in moments of stillness and quiet, you feel as if the pace is slowed down for a purpose. That, on top of excellent delivery and fine acting of a classical script, it truly deserves more audiences. Get your ticket now!

Salomé
1 September – 19 September, 2015
“She is monstrous, thy daughter…”
A young, beautiful socialite wakes up, uploads a selfie onto social media, and goes about her day. Sound familiar?

Théâtre Libre’s feminist, physical adaptation of Oscar Wilde’s Salome explores the objectification of one extraordinary woman. Movement, dance and music come together to provide a modern spin on Oscar Wilde’s classic play. How does Salome evolve under the constant scrutiny of the male gaze? What happens when she harnesses her sexuality for empowerment?