Home » Reviews » Secondhand Stories at The Lion and Unicorn | Review 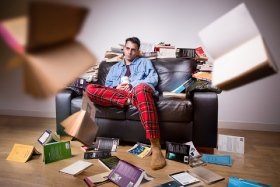 This is a show that plays tricks on the minds of its audiences, or at least on me. In Secondhand Stories, a narrative is spun, as one would expect when attending the theatre. More on that in a bit.

There are possible giveaways at the opening night performance I attended that probably won’t be present subsequently – it’s simultaneously heavy and gentle on audience participation. By that I mean there are plenty of opportunities for punters to contribute, but without pressure applied: it’s all wholly and entirely voluntary. In the audience were the parents of the writer and director of the show, Christopher Walthorne, and a lady who can testify to one of the elements of the plotline being true. Sort of.

But then, aren’t there odd people who come into any place open to the public? I popped into a branch of Tesco Express on my way home after the show, and the staff were gently trying to get rid of someone who was ultimately harmless but was trying to strike up a genial conversation when the store was busy (being located opposite a Tube station, it is seldom not busy). Life, in general, is full of characters, and so Mitch (Mitch Howell) could be making composite characters other than the one he confesses to.

It’s a bold narrative, with several critical incidents involving members of Mitch’s family. He has days when he questions the value of his own existence. Sir Ian McKellen, in a recent question-and-answer session he held with a matinee audience having been indisposed due to injury, was asked what advice he had for budding actors. His one-word response: “Don’t!” Mitch would, I would have thought, agree with such sentiments, telling the audience that ‘normal people’ don’t enter the acting profession.

There are some kind words for actors too, and some sympathy for those actors who are out of work – supply often exceeds demand. Howell voices miscellaneous characters with distinct variation, even if I couldn’t always place some of the characters’ accents. There are pauses for dramatic effect – there’s no attempt to cram as much storyline as possible into a single act production. The pauses are just the right length, allowing the words and the story to breathe.

I return to the audience participation, because there was a fair amount of it. I maintain there was no pressure applied; nonetheless, the questions asked were sometimes rather deep and personal. Out of context, it is easy to deem a request for someone to share their ‘coming out’ story to be inappropriate. Perhaps it was, even in the context of Mitch’s story reaching the point where he realised he was attracted to other men. I am, on balance, pleased that a show of this nature is prepared to explore such issues, and as Mitch points out, “If you think what you have to say isn’t important, it is.”

Despite some harrowing accounts of difficult episodes in Mitch’s life (however much or how little the stories have been subjected to creative licence), the show manages to end on a high note. A thoughtful and fascinating production with food for thought. (And for audience participants, food.)

Meet Mitch, a cynical out-of-work actor who’s just had one of the worst days of his life. Armed with a whiskey
bottle and a box of chocolates, he takes the audience on a journey through his life, wisecracking about the
present and poignantly recalling the past. But what begins as a conventional one-man show slowly morphs
into a comment on autobiographical theatre itself. Why do stories matter? Who should we share them with?
And what do our stories say about us?

This brand-new comedy-drama is a celebration of theatre, storytelling, and the people who make our lives
worth living. It is Putnockee Players’ second production, following their five-star reviewed sell-out debut
Honest Lies.

Handel’s 1738 opera Serse (or Xerxes) is an exploration of power, love and human frailty. King Serse falls in love with the voice of his brother … END_OF_DOCUMENT_TOKEN_TO_BE_REPLACED

Lea Salonga has her fans. She also has some superfans, the ones who yell, “I love you Lea!” at almost every opportunity. If that wasn’t enough, there … END_OF_DOCUMENT_TOKEN_TO_BE_REPLACED

I have no hesitation in saying that the 1952 movie “Singin’ in the Rain” and its 1985 stage version is one of the greatest musicals of all time, … END_OF_DOCUMENT_TOKEN_TO_BE_REPLACED

There are, Maria Caruso was keen to emphasise in a post-show discussion, no wrong answers when it comes to responding to Metamorphosis or even … END_OF_DOCUMENT_TOKEN_TO_BE_REPLACED

Children of the Windrush generation, sisters Dawn and Marcia, grew up in the 1980s. In Roy Williams’ new play Dawn is shown struggling to care for … END_OF_DOCUMENT_TOKEN_TO_BE_REPLACED