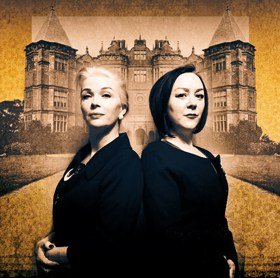 “This is no place for incestuous, same sex, canoodling.”
The Sellotape Sisters takes us back to 1966, a journey back to an era when soaps were watched by everyone and being homosexual was not only frowned upon but illegal. Which given the three characters are all homosexual sets the undercurrent of the entire play. Ethel Lewis-Lane (Charlotte Weston) and Phyllis Dix (Kellie Batchelor) are getting ready to record the last episode of their long running soap opera Sellotape Sisters which has, for some unfathomable reason, been cancelled. It doesn’t however take their long suffering supporting actor Rupert de Menthe (Jonny Freeman) to point out that the scriptwriters have included parts of their personal lives and reveal Lady Cordelia (Ethel) and Lady Diana (Phyllis) have in fact been “homosexual lesbians” for some time. How will they deal with the extremely public outing? Do they go along with it, fake fainting on set, fake their own deaths or just run away from it all?

For me the play really gets going on the comedy front when we have the three actors recording the final episode. There is over-acting, missed cues, script deviation, more over-acting and just general hamming up and farcical nature of the whole scene. This does make for a funny play though and it is acted superbly by all three. There are gentle nods to the serious homosexuality theme during that era but these are overlooked for the humour and quick gags. It’s billed as a comedy though so that’s to be expected, I would have just liked more around the emotional sections that did get drowned by being surrounded by gags. Be warned there is bad language, not terrible and extreme, in this play. Although it is mainly used for the comical aspect, such as, “He called me the C word… and I don’t mean cunt” which was quite amusing.

All in all well worth going to watch. It is well written and superbly acted. The set and lighting are both minimal and functional. A good way to spend an hour if you want a laugh.

It’s 1966. Legendary soap opera Sellotape Sisters (the pretensions of Downton, the production values of Crossroads) is being cancelled.
With no ideas left for the final episode, the writers’ raid the actors’ private lives for storylines. In shock and denial, and with the last live broadcast looming and twenty-two million viewers watching, will the cast stick to the script?
Find out as Noises Off meets The Killing of Sister George (via Acorn Antiques) in this outrageous, farcical and ultimately heartfelt new play from former Coronation Street storyliner Lee Mattinson, fresh from its hit run at the Brighton Fringe

This play was first put on at The Mill at Sonning in early 2010 - the world has, of course, changed significantly since then, and the script has been … END_OF_DOCUMENT_TOKEN_TO_BE_REPLACED

It’s easy to see why the Orange Tree has brought this one back for another run, less than a year after its first outing here. This is a bold, … END_OF_DOCUMENT_TOKEN_TO_BE_REPLACED

I always loved Choose Your Own Adventure books. Definitely not the Steve Jackson ones where you had to roll dice (who did that?) to find out whether … END_OF_DOCUMENT_TOKEN_TO_BE_REPLACED

Well, there’s a bit about Pablo Picasso’s (1881-1973) paintings in this show that bears his name. But it’s mostly about his approach towards women. … END_OF_DOCUMENT_TOKEN_TO_BE_REPLACED