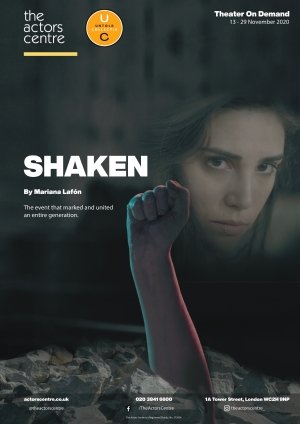 An impressive set recreates the aftermath of an earthquake, with rubble all around. A woman is lying on the ground, her clothes covered with dust and debris, and as she slowly rises to her knees, she signs the cross repeatedly, before climbing to her feet, distressed at what has just happened. In the following scene, the audience is introduced to Mariana (Mariana Lafón), who wants to take a look back at the 1985 earthquake in Mexico City that caused a huge amount of devastation, and see if there are lessons to be learnt from it.

The rest of the play, therefore, comprises a series of different scenes, each telling an aspect of the story from various perspectives, and using miscellaneous techniques and narrative devices. This sounds, at surface level, as though the proverbial kitchen sink has been thrown at this production (and in some ways, it has), but nonetheless, it works. All are performed by Lafón. The then President of Mexico, Miguel de la Madrid (1934-2012), gave a speech about how wonderful the relief effort on the part of the government he led had been. This was counteracted by a puppet, perhaps an astute journalist, who pointed out that most if not all of the actual assistance being provided was being done by private citizens working in collaboration rather than any help from the state.

There were, perhaps inevitably, much more heartrending stories to follow. Dolores lost a number of direct relatives and has become a full-time volunteer for a relief agency. A man tells of an attempted rescue that was only partially successful in the end. And then there was a young lady who asserted, somewhat bizarrely, that the Earth responded to all the partying and dancing that took place on September 16th, Mexico’s Independence Day with an earthquake. In which case, why doesn’t it happen every year? The theory may have been rather frivolous but it paved the way for a very spirited dance sequence, demonstrating Mexican dance and how joyous it can be: something the local population needed following the earthquake and the thousands of deaths that resulted from it.

What is extraordinary about Lafón’s findings is not so much that there was a considerable amount of fraud and corruption at the heart of Mexico’s government. It’s that Mexico is not the only country to have had a government that was far from honourable, and while all the stories in this production are very much centred on what happened there, the dissatisfaction with political leaders is incredibly relatable to others in different countries, even now in a supposedly more enlightened world. The closing scene is one of defiance and hope, and this complete and compassionate story has it all – covering the story from different angles, and palpably coming from the heart, this is a poignant and passionate production.

Shaken, part of The Latin American Season presented by The Actors Centre, curated by The Untold Collectiv.
The play will be available to stream until the 29th of November.
Duration: 30min
https://www.actorscentre.co.uk/