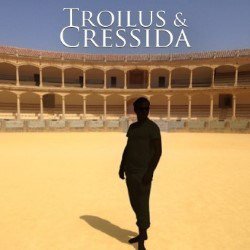 Performing Shakespeare is never an easy task. I have seen many full length productions of Shakespeare plays where half the audience is lost in the first clever direction (Kate Littlewood), the show is impressively easy to follow, and yet, Shakespeare’s language is never compromised to entice a modern audience.

One thing that is evident is Littlewood has worked hard to guide the actors so that they are comfortable on stage (it is in the round, which is no easy feat) and yet able to control it without the show feeling choreographed and static. This is a success thanks to not only the direction, but an intelligent cast who are evidentially very much in sync with each other and the story.

Isabel Sutton (Cressida) is charming and energetic yet vulnerable. Her dynamic performance is an energy that helps keep the play vibrant and her romantic connection with the very talented Louis Bowen (Troilus) is playful and heart warming, yet she also holds the stage alone with ease. She is at her best in the happier part of the play, but still portrays heartbroken Cressida well.

The choice to multi-role the parts is clever and well executed as it allows the actors to show how the cast on the whole, have the ability to switch between very different characters, as it is never hard to distinguish between the roles they are portraying, despite some actors playing up to three parts. James Meteyard is a particularly good example of this, his Aenas is likeable yet mysterious as his uneasy smile causes us to wonder if he is kind or spiteful behind the disconcerting calm. This is contrasted by his volatile Ajax, who is a fantastic comic relief as an accidental and unaware fool. Jamie Littlewood and James Mear do the same, a hilarious and playful pair who give us a well needed smile amidst more serious moments. However, they lull us into a false sense of security, capturing our hearts throughout and then proceeding to break them.

Charles Bateman (Pandarus) shines in the show, turning a supportive role into a lead. He didn’t multi-role, which gave him more of a chance to develop his character, resulting in him being one of my favourite characters in the piece.

The play sometimes loses momentum as we move from location to location, but that rarely takes away from the piece for more than the first few lines of a scene. The show is on the whole, dynamic, energetic and touching, with talented actors led by a fantastic director doing their characters and the story proud.

SOTL brings an irrepressibly modern thrust to the play as celebrity war-mongering turns the world’s eyes to the Aegean Sea once again.

This is a tale told not so much by idiots as by jaundiced commentators, facilitators of a culture of war that feeds on itself, on vanity, celebrity and sex. ‘Wherever there is war’, Jonathan Bate says, and debate about its rights and wrongs, ‘Troilus and Cressida will be a living play’.

Here it’s brought to life by Shakespeareonthelevel, a cast of young, professional actors highly trained in finding the visceral in the classical. A play that often runs close to 4 hours is presented here in 75 minutes, the long rhetorical set pieces abbreviated, turning the spotlight on the personal like Big Brother’s lascivious eye.