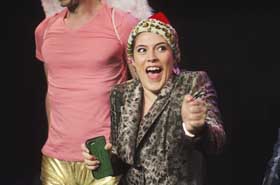 The Christmas season is once more here – and if you were to believe certain supermarkets it has been since August – and therefore theatrically it is time for pantomime and nativity plays to take over the stages of the UK. But, if you want a break from tradition than you should get yourself to the Rosemary Branch Theatre and take in Shaun Kitchener’s new play Christmas Farce

In the Green Room of a regional theatre, Assistant Stage Manager Makenzie (Christopher Cohen) has been adding some festive cheer with a tree and decorations (I’m guessing courtesy of Poundland) to make the place more welcoming for the cast of the Nativity play which is having its opening night that evening. Keeping him company is Alice (Natalie Lester) the understudy to all the cast who is hoping that seven years out of drama school she may finally get a chance to perform on a professional stage. It’s ‘The Half’ and Director Beatrice (Roberta Morris) arrives. It may be opening night – complete with press and reviewers in the theatre – but she is, in her own words, “sereen as a lagoon”. Although as curtain-up draws closer, that serenity does start to crack a bit. Slowly the rest of the cast arrive. There is bickering couple Georgie (Katherine Edrupt) and Jonathan (Timothy George) who arrive arguing about which car to come to performances in. Georgie has been in showbusiness for years and has a wealth of ‘interesting’ tales from her times treading the boards. Jonathan is pompous and looks down with disdain on the majority of his fellow cast members with one exception, the leading lady, and ex-soap actress Stacey (Jamie-Rose Monk). Last to arrive is local radio ‘legend’ Danny (Jack Gogarty) who is planning to wow his mainly female fanbase with his portrayal of the Archangel Gabriel in gold hotpants and glitter.

Beatrice calls all her cast – including already dressed and ready to go on stage Samuel (William Sebag-Montefiore) – and tells them to go out and put on the best show possible.

Unfortunately, as Act I beginners are called, this particular production is about to be hit by the full force of Murphy’s Law as the show is hit by a plethora of problems. Unexpected love, frying pans, washing machines, trifle, closet doors, a cliffhanger face and foreign accents all work together to deliver a nativity that none of the audience will ever forget.

I really enjoy farce and Christmas Farce is a fine example of the genre. Shaun Kitchener has written a great play that has relevance for people who work in theatre and at the same time really draws non-thespians into the world of the Green Room and the mass of human emotions that sit within those four walls.

In fact, watching the show I had a wonderful sense of deja vu as Timothy George’s Jonathan threw the hissiest of fits storming through the Green-Room saying ‘I Quit’ which brought back memories of doing am dram years ago where a particular member of the cast at some point always did exactly that.

Which brings me to the cast. One word – awesome!. Every member was just great and totally believable in their respective role. By the end of the play I was pretty much convinced I had actually seen Jamie-Rose Monk in one of the television soap operas, as she had got the mannerisms of a soap star so perfect. I also loved Beatrice, a character that could have been over-played easily but which in the hands of Roberta Morris came across beautifully – delivering the last line of the play in a wonderful, measured way that left the audience in no doubt as to what was going to happen next. So, a really talented cast who I absolutely loved but I did have my favourites among them.

My two favourite characters were Makenzie, from whom I now have a much better idea of the life of an Assistant Stage Manager and Christopher Cohen even managed to elicit a very sympathetic ‘oh bless him’ from one of my companions at one quite emotional point. My other favourite was Jack Gogarty’s Danny, another character that could have been totally overplayed but as someone who has been in a similar position to Danny – albeit without the fame angle – I can honestly say it was a very authentic performance.

I have to say, if Shaun ever felt the urge to write it, I would love to see the nativity show that this group of actors were putting on.

After Christmas Farce finished, my companions and I discussed it in great detail. Firstly I found out why the Green Room is so named. Then we decided by a vote of 2-1 who was the most fanciable cast member and then moved on discuss the show in detail. One of my companions brought up ‘Noises Off’ – which is apparently the yardstick against which all plays set backstage in a theatre are measured – and very favourably compared Christmas Farce to that. Having not seen Noises Off I just looked at this as a play in its own right and decided that Christmas Farce is a superb play in every respect. Brilliant writing from Shaun Kitchener combined with a highly talented cast under Director Hannah Rowley produced a show that my friends and I decided was not only an awesome start to the Christmas season but should now be among the stable of plays put on at this festive time of year.

Christmas Farce, written by SHAUN KITCHENER (“brilliant comic sketches… clearly a playwright to watch” – The Times), goes behind the scenes at a fictional regional theatre on the opening night of a modern retelling of the Nativity story. With tensions between the cast coming to a head, they’ve got their work cut out if they’re to stop the show becoming a complete turkey.

The show runs at the Rosemary Branch Theatre (London N1) from Tuesday November 24 to Friday November 27. All tickets are only £10.
http://www.rosemarybranch.com/

The Body Remembers is an intimate, passionate, and nuanced exploration of bodily trauma and the relationship we have with bodies. In this solo … END_OF_DOCUMENT_TOKEN_TO_BE_REPLACED

Some sprightly choreography sprinkles this production of Top Hat, and I have yet to work out whether it is because of or despite the relatively … END_OF_DOCUMENT_TOKEN_TO_BE_REPLACED

What are the moments that make up a lifetime? As Elizabeth and Tom reminisce about their lives together from school to old age we realise the most … END_OF_DOCUMENT_TOKEN_TO_BE_REPLACED

The much-beloved Figs in Wigs return to London with intent. This take on Little Women by Louisa May Alcott takes you for a ride, swings you around, … END_OF_DOCUMENT_TOKEN_TO_BE_REPLACED

As one might expect in a play about the life and times of Mary Prince (Amantha Edmead), born a slave in the late eighteenth century, she is subjected … END_OF_DOCUMENT_TOKEN_TO_BE_REPLACED