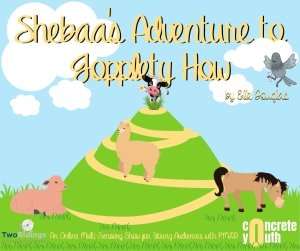 The audience is taken on both a literal and metaphorical journey in Shebaa’s Adventure to Jopplety How, in which the journey itself ends up being just as interesting as the end result. The crystal clear delivery in this production, aimed at young audiences (and particularly those with ‘profound and multiple learning disabilities’) may, for better or worse, remind some carers and responsible adults of Blue Peter, or even Listen with Mother. Before diving into the story, Jodie Hay as the narrator asks, “Are you ready? Are you settled in? Oh, what great news, then we shall begin!”

I can see the show working in a theatrical space (perhaps that was the original intention) with the right sort of lighting and the provision of a list of objects that is included in the pre-show instructions for the audience to use at the appropriate moment – the list of props includes a hand fan, a shaker, some cotton wool and a blown-up balloon – though, interestingly, a rubber glove is a suitable alternative for the balloon. It would be giving far too much away as to state what exactly each of the props is for, except to say it would be genuinely useful to have them to hand if at all possible if watching the show with children.

As I noted shortly after lockdown began, one of the handy things about online productions is that if, say, the doorbell rings during the show, one could always press pause and resume watching when convenient. It is especially useful here if, for whatever reason, a child watching the show can’t quite follow proceedings – unlikely, given the efforts made to articulate the story through words, visuals, costumes, Makaton and more, but you never know.

Anthropomorphism is nothing new in children’s theatre – consider, for instance, Winnie the Pooh, Peppa Pig or The Lion King. There are some interesting ideas in this story about how various members of the animal kingdom support one another: various characters, played brilliantly by James Lewis-Knight, include Harvey the Horse, Pepper the Pigeon and Alfreda the Alpaca. The backdrop still images in the show are delightful, and the story itself is rather charming and inspiring, with the actors bouncing around with remarkable energy.

The plot is predictable – let’s just say it’s not exactly a David Attenborough wildlife documentary about predator pursuits – but it is pretty much impossible to find fault with the underlying message of the story, in which Shebaa discovers that what sets her apart from the other sheep she lives with is something to be celebrated rather than be embarrassed about. An agreeable and enjoyable show.

Shebaa The Sheep has never had any wool!
She spends her days feeling different from all of the other sheep in her herd and it makes her feel very sad. After finding a book at her local library, Shebaa goes on a quest to meet the world’s most intelligent and wise creature in all of the land; The Wisdom Cow of Jopplety How in the hope that he can grant her one wish, to have a coat of wool her lamb friends would envy. Join Shebaa as she goes on an adventure, meets other furry friends on the way and learns that there are differences in the most unlikely of places.

Award-winning theatre company, Concrete Youth are delighted to present Shebaa’s Adventure to Jopplety How. Written by Elle Douglas and directed be Belle Streeton, this online multi-sensory production for audiences living with profound and multiple learning disabilities is perfect to ease the boredom of lockdown, packed full of sensory moments that are sure to open up the imaginations of your little ones!

Audiences will be asked to gather everyday household items to act of sensory play stimulus during the show’s sensory engagement periods. For example, at one point, we meet Harvey the Horse, so audiences may be asked to gather a fluffy blanket from their bedroom, so they can explore how Harvey’s fur feels.

The comedy value in this episode of The Seth Concert Series was off the scale. Christine Pedi has done several productions of the Forbidden Broadway … END_OF_DOCUMENT_TOKEN_TO_BE_REPLACED

The album for this show, I Could Use A Drink, was released in 2013 but there were nonetheless moments when it felt very much like the show was written … END_OF_DOCUMENT_TOKEN_TO_BE_REPLACED

It’s easy enough to get immersed into a production like this. Even in its concert format, there’s something compelling about the way in which the … END_OF_DOCUMENT_TOKEN_TO_BE_REPLACED

I wouldn’t exactly say Ben Forster appearing as himself in this musical comedy is a career highlight (he is, after all, someone who has played the … END_OF_DOCUMENT_TOKEN_TO_BE_REPLACED

It’s an intricate plot, laced with some subversive humour - that the female character is simply called ‘The Woman’ (Molly Lynch), for instance, is … END_OF_DOCUMENT_TOKEN_TO_BE_REPLACED