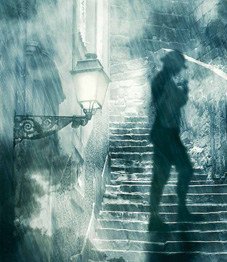 The ‘Invisible Thing’ is not an original work of Conan Doyle but instead a quirky but very faithful tribute to the world’s most famous detective. The writer, Greg Freeman, has obviously studied his subject closely and the resulting play is worthy of using the name ‘Sherlock Holmes’. The set itself spoke a thousand words being impeccably dressed for the period and style of the Sherlock Holmes era; the costumes and details were impressive and set the scene perfectly.

The casting is perfect. Alex Mann in the titular role is dark and brooding and capable of communicating both verbally and physically the complex make up of a man constantly calculating and assessing the fine details of any situation that befalls him.

With Freeman’s words and his portrayal we even see a touch of humanity and a glimpse of romance to this usual ‘cold fish’ role. Mann’s Sherlock has drive and warmth and the chemistry with his Watson is as strong as ever. Richard Fish gives Doctor Watson the usual side kick humour but also adds a little strength to the character. With this adaptation we see a stronger more challenging and demanding Watson. The literary duo have legendary a camaraderie and Fish and Mann have a natural rapport that is a joy to watch.

The story unfolds as a flaky heiress witnesses a strange supernatural murder and she calls both the police and on Holmes to help her rid the ‘Water Demon’ that seems to be haunting the lake on her lands. The investigation leads to the discovery of dark family secrets and hints at an intimate past connection between the lady and Holmes.

Saria Steel is excellent as the teasing, sultry, misunderstood and usually drunk Lucy Grendall. Her portrayal is both vulnerable and mischievous which lends to the mystery of her possible involvement throughout; and leads all 3 male characters to fall over themselves to help prove her innocence.

The play has an amazing cast, including a wonderful comedic performance by Dan Maclane as the hygienically challenged Police Inspector who seems to get the upper hand on Holmes in more ways than one. And an outstandingly moving performance from Faith Edwards as the servant with abilities that are so amazing they cause Holmes to shake her hand and call her his equal.

This is a very enjoyable production with great direction from Ken McClymont. His ability to knit together the period, the supernatural elements and create a very charismatic and atmospheric performance are a real credit. Whether you are a die hard fan or new to the world of Sherlock Holmes, this is something you should go and see it is a very very good tribute and an excellent stand alone play.

A perplexed Inspector Peacock summons Holmes and Watson to the home of Miss Lucy Grendle, the daughter of the late Alfred Grendle, a man who had a somewhat murky past.

Miss Lucy Grendle has a problem with vodka… and Sherlock Holmes. Their paths have crossed before and it did not end well. Tension is in the air and it is not just because a murderous Invisible Thing is prowling the house.

As the night unfolds, amidst a lethal concoction of a cadaver, origami and alcohol … Sherlock Holmes finally meets his match.

Tori Scott needs to tell baristas in the sort of coffee shops that write customer names on paper cups in marker pen that it’s Tori With An ‘I’. While … END_OF_DOCUMENT_TOKEN_TO_BE_REPLACED

A child plays with an orange, and the old man works himself into the ground. Playful, rough, intimate and touchingly funny, Home is a piece that will … END_OF_DOCUMENT_TOKEN_TO_BE_REPLACED

Like most people, I think, I often have mixed feelings about a show I see. Occasionally, though it is rare, there will be a production where … END_OF_DOCUMENT_TOKEN_TO_BE_REPLACED