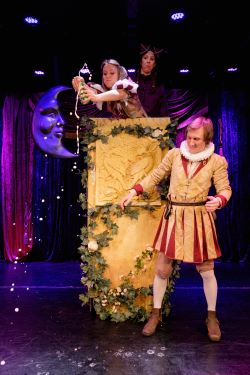 Romeo and Juliet from the Bard himself, just with a twist or two. The tale of Romeo and Juliet is trimmed down to just around the hour with a cast of 6 actors. These actors get in early for a party but only one of them drinks. For the rest, it is to slowly watch their fellow thespian get progressively drunk. Once the show starts, the compere hands out a couple of attention seeking tools so two members of the audience can decide when the actor who’s drinking requires a top-up! This can happen at any time and when it does a horn sounds, the rest of the cast stop exactly where they are and the compere rushes on and gives the drinking actor a fresh beverage. When the horn sounds again the play continues from where it was. Of course, the drinking actor is rarely in the same position and progressively getting more drunk so mayhem ensues.

This concept is total genius if you ask me. It is unlike anything I have witnessed before, apart from the fact I’ve seen this company before and will do so again. The ad-libs and mayhem caused are hilarious. How the sober actors react to and work their way back to roughly where they should be in the script is excellent to watch. It is also impressive how much the drinking actor actually remembers throughout the play.

I have no idea how drunk they get, I imagine that’s different for each actor. They do however rotate the drinking actor so that each ‘thesp’ never drinks more than 4 times a month; well not for the purposes of the play at any rate! For this performance Richard Hughes was Romeo, Beth-Louise Priestley was Juliet, Saul Marron was Mercutio/Friar, Christopher Lane was Capulet/Tybalt, Victoria Fitz-Gerald was Benvolia/Nurse and Stacey Norris was the Compere. The actor having the hangover the following day was our Juliet (Priestley) and to be honest it didn’t seem too much like a hardship for her to drink the Becks (other beers are available). All performances were great, either delivering the actual lines or dealing with the mayhem caused by Priestley’s inebriation…! If you’re a traditionalist Shakespeare aficionado this probably isn’t for you but for everyone else it is a hilarious hoot.

Not much else to say other than go and see this or any other Shitfaced Shakespeare production they put on.

Following in the footsteps of their booze-fuelled trip to Venice with The Merchant of Venice earlier this year, the critically lauded (and occasionally lambasted) Magnificent Bastard Productions hot foot it to Verona as they make their return to the Leicester Square Theatre (20th June – 1st September). From sozzled star-crossed lovers to a tipsy Tybalt, Sh*t-faced Shakespeare give Romeo and Juliet their signature Sh*t-faced twist as the cast attempt to navigate the bard’s fated love story with one drunk performer.

So how does it work? Each performance has a cast of six actors, who all arrive four hours before the start of the show for a ‘party’ – however, this party is dry for all but one performer, who gets Sh*t-faced. The rest is a balancing act between the (trimmed down to an hour) Shakespeare script and improv rules, which state you must go with whatever the drunk actor decides to do. “Yes, and…” rather than “No, but…”. Every single show is a one-off. Every single performance has a different drunk actor. Every single time they are genuinely inebriated.

Magnificent Bastard Productions presents:
Sh*t-faced Shakespeare: Romeo and Juliet
What’s in a name? That which we call a (bottle of) rosé by any other name would smell as sweet.
Leicester Square Theatre, 20th June – 1st September 2018