Home » Reviews » Sitting With Thistle at the Lion and Unicorn Theatre 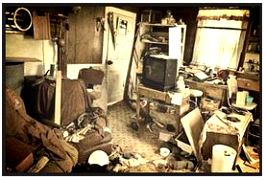 “It’s been snowing heavily all week. Mark and Elysé have been trapped for three days. Gran died after two..” states the programme we’re given as we arrive to see Sitting With Thistle, a one act play written by Marietta Kirkbride and directed by Elf Lyons and Simon Kane.

The play is performed in the small Lion and Unicorn Theatre near Kentish Town Tube Station. Upon entering the theatre space, which is on top of a rather lovely pub, we are greeted by the sound of howling winds and a room filled with all sorts of weird objects, including what it is later revealed is a collection of sheep skulls. There’s a table with two chairs and an odd bundle of what looks like blankets and jackets. Then suddenly the lights go out and a frantic banging on the door starts, along with shouts to let him in. It goes on for just long enough to make you a bit uncomfortable, and then the lights come up on Mark (Mathew Foster) and Elysé (Pascale Morrison-Derbyshire), who sit down on different sides of the table.

The bundle of clothing is revealed to be their deceased grandmother, and the two have been waiting for the ambulance service for some time. The siblings have not seen each other for some time, as Mark lives in New York and doesn’t keep in touch. It’s immediately clear there is unresolved tension between the two, and the play explores their relationship that they can’t hide from as there is no distraction available, no television, no wi-fi or phone signal to prevent them from having to be too aware of each other.

It’s a peculiar piece and very intense. The relationship between the siblings feels truthful and their constant bickering you can only have with a close family member is something that is familiar. I don’t want to give too much away about what caused the rift between the siblings as it’s best experienced with the gradual reveal in the play. The actors are wonderful and don’t miss a beat even when something goes a bit wrong, like when Elysé throws a marker across the room and it ends up under the shelf. Mark gets on the floor and pulls it out, while still arguing with his sister. The throw was so perfect that I can’t believe it was on purpose, but you wouldn’t know it to look at the actors as they keep going.

There is a lot of dialogue in this play, but some of the best moments come from the silence between the siblings, heavy with the things that they don’t know how to have a real conversation about. It’s a silence everyone knows. When the first scene is repeated in its rightful place in the narrative with the lights on, Elysé’s non-verbal reactions to the shouting and banging are frightening in their cruelty, ignoring her brother’s pleads to let him back in.

Sitting With Thistle is a challenging peace, at once dramatic and funny. It’s performed with skill and heart, and is only on for another few days, so catch it while you can.

It is 2002 – another Royal Jubilee year, and HRH (Mary Roscoe) is due to open a new Science wing in a 'sink' comprehensive where Dr Derek Jones … END_OF_DOCUMENT_TOKEN_TO_BE_REPLACED

Dr Anna LaRosa (Dr Stefania Licari) has a lot to say. Just as well, as she’s the only one on stage in this medical comedy, which largely draws its … END_OF_DOCUMENT_TOKEN_TO_BE_REPLACED

Nikhil Parmar’s one-man show, originally written as a TV pilot, manages to touch on a wide range of themes from Islamophobia to modern fatherhood with … END_OF_DOCUMENT_TOKEN_TO_BE_REPLACED

Handel’s 1738 opera Serse (or Xerxes) is an exploration of power, love and human frailty. King Serse falls in love with the voice of his brother … END_OF_DOCUMENT_TOKEN_TO_BE_REPLACED

Lea Salonga has her fans. She also has some superfans, the ones who yell, “I love you Lea!” at almost every opportunity. If that wasn’t enough, there … END_OF_DOCUMENT_TOKEN_TO_BE_REPLACED