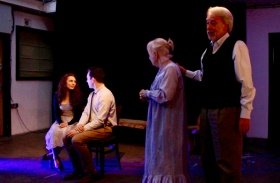 Back in the early days of British postwar satire, the sketch was a fashionable dramatic instrument, miniature in form but massive in potential. So it’s good to find it alive and well at the vibrant Stour Space, a reclaimed building among the waterways of Hackney. The address – Roach Road, Fish Island – is eloquent.

But wait a minute. Sketchy Nights might well be the title of the evening, but the reference is visual as well as dramatic, for here is an art show lending its space to a handful of playlets. The idea is that these two elements – three if you include the ambient music – should do whatever is the opposite of crowding each other out. Collaborate is probably the word.

Its curator Lucy Ralph explains that to see talented performers respond to artwork offers an audience, and even the artists themselves, a way of seeing art from fresh angles. Hence we are invited, when viewing the exhibited work on the walls, to make connections between them and the action we have been watching onstage. This linkage may not be essential to an appreciation of the show, or shows, but we get the picture, and it’s a bold one.

It’s also a sociable one. Ralph’s longstanding friend Katherine Moran, lately seen in the far removed world of Noel Coward’s Private Lives in the gardens of Lauderdale House on Highgate Hill, is the evening’s director. Hence the programme can be seen as two young (forgive the word) creatives wanting to channel their respective disciplines into a common cause and then, one year on, finding themselves in that minority who turn such visions into events.

The seven short pieces do as short pieces must; set out their stalls, grab your attention, do the business and leave. Here is a range of confrontations, some quite conventional, others more fanciful: in Gareth Morgan’s Draw a pair of guys finding themselves, with £30,000 in a stranger’s jiffy bag; in Dan Overton’s Clean Sheets a couple of flat-sharers torn to pieces by the impossible politics of sex and rent.

In Dan McGeechan’s A Long Trip we see an elderly couple’s touching re-enactment of their courtship, with the young pair and the old one enacting a dance of hope and memory as they wander in and out of the other’s dialogue; Natalie Beech’s Girl finds Katherine Moran in fine comic form in Natalie Beech’s take on the perilous interplay – intercourse would be an exaggeration, just – between libidinous urges and public transport. Adopted Spider Babies by George Coates and Edie Newman has Kelsey (played by Newman) bemoaning the sheer impossibility of taking her girlfriend home to meet her parents. Her First Interview Since Her Dramatic Escape teasingly tackles the business of facing the hard-nosed media with an account of personal trauma.

For all its global participants (Benin, Brazil, France, South Africa, America, Switzerland, Turkey and the UK), it’s a peculiarly English evening, almost Fifties in parts, full of parents, problems, bedsits, anxiety, the difficulties of lust and love, the challenges of decency. The extent to which the stage show and its enclosing art show need to feed off another is a moot and personal point. The thing is, it’s there if you want it.

Step into the hilarious and heartbreaking worlds evoked by the global artwork that surrounds you at Hackney’s beautiful Stour Space.

Sketchy has been created by fine artist, Lucy Ralph, and actor, Katherine Moran, as a celebration of art in its many forms. Sketchy aims to make contemporary art more accessible, to start conversations between different artistic disciplines and create an exciting, original and inclusive common project.

Everyman is one of the earliest printed plays, originally written in Middle English and first performed around 1510. It is a morality play, popular … END_OF_DOCUMENT_TOKEN_TO_BE_REPLACED

After being closed for over two years due to covid, the Arcola Theatre has re-opened with Barney Norris’s love song to the people who raised him, We … END_OF_DOCUMENT_TOKEN_TO_BE_REPLACED

Now in its 15th year, La Clique have firmly established their place on the world burlesque circuit and this year’s London cast bring their infamous … END_OF_DOCUMENT_TOKEN_TO_BE_REPLACED

Warm, funny and lacerating, Satinder Kaur Chohan’s new play opens with a fly-on-the-wall look at the daily attempts women make to be accepted and … END_OF_DOCUMENT_TOKEN_TO_BE_REPLACED