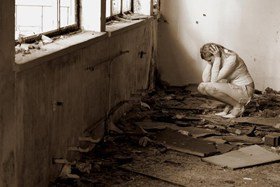 A run-down hotel in a nameless country, just emerging from a bitter civil war. In two identical bedrooms, two scenes are unfolding. In one, a young mother, willing to do anything to save her sick child… and the man who’s willing to let her. In the other, a famous photographer on his way to accept an award, being interviewed by a journalist with her own agenda.

Skin in Flames is a gripping political thriller by Catalan playwright Guillem Clua. And when I say gripping, I mean it grabs you by the throat in the first 60 seconds, and doesn’t let go. Everything about directors Silvia Ayguadé and Franko Figueiredo’s production – the lighting, the music, the staging – combines to create a masterpiece of suspense that keeps the audience on the edge of their seats from start to finish.

At the play’s heart is a photograph, of a little girl flying through the air after an explosion, which has become a symbol across the world of war and its innocent victims. The photographer, Frederick Salomon, has gone on to win international acclaim, but the girl in the picture has never been identified.

Although the play was written over ten years ago, it’s just as relevant today – perhaps even more so, in this era of social media, when an image can be shared instantly and go viral within minutes. We’re all used to seeing photographs from war-torn nations and disaster zones on the other side of the world, but how many of us actually stop and think about what those images mean? Have we become so immune to mass-marketed images of suffering that we don’t even care any more? And should we really be giving awards to photographers who’ve chosen to lift their camera instead of holding out a hand to help someone in need?

These are uncomfortable questions, and not easy to answer. Just as the balance of power shifts back and forth between Salomon and his interviewer, Hanna, so our responses may change from one minute to the next. Skin in Flames is not a play that you watch and then forget about; the questions it poses linger long after the actors have taken their bows, and set the stage for hours of heated post-theatre debate.

In this, the UK premiere of Clua’s award-winning play, four actors share the tiny, cramped space of the hotel room as the two stories unfold. While Salomon and Hanna discuss his photograph and its implications, in the background Ida performs sexual favours to earn medication for her daughter from Dr Brown. In a later, haunting scene, Ida sits on the bed, reading her daughter’s favourite children’s story in a singsong voice, while, just in front of her, Hanna brandishes a gun and threatens to shoot. This structure allows the two separate stories to develop simultaneously in real time, finally fitting together like pieces of a puzzle to form one perfect whole.

The cast are universally strong, but it’s the women who particularly stand out. Bea Segura is a ticking time bomb of emotion from the moment she steps on to the stage; the only question is when she’ll explode. Meanwhile Laya Martí is heartbreaking as the one character who never gets to have any power at all; Ida is little more than a child herself, a wide-eyed innocent abused by a man who should be protecting her, and so fragile you fear she might snap at any moment.

Skin in Flames is the kind of play you need to see more than once, if only because at times the tension begins to run so high that it’s difficult to concentrate on what’s actually happening. But not only that: the intricacy of the writing can only truly be appreciated with hindsight, and I can’t help feeling that a second viewing would be a very different, but equally rewarding, experience.

Skin In Flames
Since its world premiere in Barcelona in 2005, Skin in Flames has had global success, with critically acclaimed productions in Spain, Greece, Poland, Latin America, and the United States. In 2004, Clua received one of the country’s top theatre awards, the City of Alcoi Theatre Prize – having previously won the same award for his first play The Invisible – and the following year he received the Barcelona Critic’s Choice Award ‘Serra d’Or’ for Best Play.

A famous photojournalist returns to the country where his career was launched during a brutal civil war. One of his photographs – a schoolgirl flying through the air in the aftermath of a bomb explosion – has since become a world-renowned icon of war, violence, and innocence. Whilst the photograph has become a household image, the girl has never been identified. Twenty years later, the photographer returns to the fledgling democracy to receive a prestigious peace award, but first must be interviewed by an ambitious young woman whose story seems eerily familiar.

Titus Andronicus is not usually a comedy, it is usually a bloody, villainous and vengeful tale, but tonight it is a comedy and a rather amusing one at … END_OF_DOCUMENT_TOKEN_TO_BE_REPLACED

This show is not without clichés - there are three of note in this production. Firstly, the French horn of the show’s title is personified, speaking … END_OF_DOCUMENT_TOKEN_TO_BE_REPLACED

There’s very little in the way of set in this show: aside from chairs, a few crash barriers and at one point, a red carpet, the actors’ movements … END_OF_DOCUMENT_TOKEN_TO_BE_REPLACED

South African born, but raised on the Isle of Man, Pierre Novellie is a true raconteur rather than just another 'stand-up' comedian. He says about his … END_OF_DOCUMENT_TOKEN_TO_BE_REPLACED

This show, Willy Hudson began by saying, is about himself. It is written by himself, is directed by himself and executive produced by himself. Almost … END_OF_DOCUMENT_TOKEN_TO_BE_REPLACED