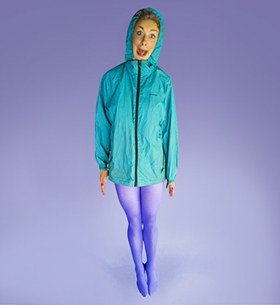 Akin to a ménage à trios of The Vagina Monologues meets Sex & The City vs South Park. Smasher is a comedy piece that marries observation with the absurd and honest truth of sexual intercourse. Refreshingly candid, it is the type of chat that women through millennia have explored except this time on a stage, with lights, sound and props!

Comedienne Helen Duff is brilliant at taking the subject from all angles; the audience is introduced to the witty waif as a sperm in full on waterproof get-up. At first this guise is not an obvious choice but with various mounting of audience members, bad chat up lines and let’s face it, a bit of audience fore play, the penny drops that you’ve entered a sacred place where no holes are bared.

If you are male, this is a soft introduction to girl talk, a real yet comical chat about the trials and tribulations of female ejaculation and reaching the pinnacle of sexual highs. This is not a tyrannical feminist view but an honest exploration of life. The show offers an amusing insight from a male perspective and you know what, if you go as a couple, you might just learn something!

Tasked with the question, “what does an orgasm feel like?” The audience builds a crescendo; playing with poppers, bananas, water guns and more to produce a medley of surreal expectations regarding the mystical orgasm.

From a female perspective, this show is great for anyone with a vagina but boys, don’t be discouraged! It’s funny, it’s banterful and definitely holds plenty of laughs. Just as in life, it wouldn’t work without you! This is a show that doesn’t take itself seriously. Heckle and enjoy, the show teaches you that you can’t plan your enjoyment, you just have to relish the journey wherever that takes you.

As a show the content is pretty ballsy; poignant, witty and fun. Helen Duff exhibits a fragility that gives the show a purpose. Sure, there’s enough content to make you laugh out loud but there is also an underlying current of truth that wins out. It’s a statement for all the underdogs that it ain’t all stars and glitter but a self exploration, something to aspire to.

Following a sell-out tour of the comedy festival circuit, Helen Duff proves that sex sells so don’t be shy, get it while you can, this is one night you won’t regret!

Hot off the back of a SOLD OUT work in progress run at the Edinburgh Fringe 2015 and a direct transfer to Perth FRINGE WORLD 2016, SMASHER is the second instalment from Fringe First nominated Helen Duff, following on from her solo debut show VANITY BITES BACK (winner of VAULT ‘Judge’s Pick’ Award 2015), which opened VAULT Festival London 2015, was selected for the Adelaide Fringe and Melbourne International Comedy Festival, and finished its UK tour with a ★★★★★ rated run at the Tobacco Factory, Bristol this October.


The pairing of work by Bob Dylan and Leonard Cohen in a single recital is a logical move. Though the latter died five years ago, his and his old … END_OF_DOCUMENT_TOKEN_TO_BE_REPLACED

If the dialogue wasn’t quite so eclectic and engaging, I might have decided to attempt to have kept a tally of how many times a trestle table is … END_OF_DOCUMENT_TOKEN_TO_BE_REPLACED

Doctor Who: Time Fracture by Immersive Everywhere has plenty to exhilarate both avid and casual Doctor Who fans, delivering on its promise to let … END_OF_DOCUMENT_TOKEN_TO_BE_REPLACED

A brief review of a brief play. It is, as the Prime Minister (Lisa Day) observes, extremely unlikely that her ‘letter of last resort’ would ever … END_OF_DOCUMENT_TOKEN_TO_BE_REPLACED

It’s a production of Hamlet that starts at 7:30pm and manages to come down on the ‘right’ side of 10:30pm - the hardcore fans and followers of … END_OF_DOCUMENT_TOKEN_TO_BE_REPLACED