Panto for me is where my love of theatre started and is a real Christmas tradition. I have lots of happy memories of going to my local panto every year & joining in with the obligatory “it’s behind you“, and other audience participation.

This year I have been looking forward to going along to the Churchill Theatre Bromley to see their offering of Snow White. Some of you may remember I got to interview and photograph some of this year’s panto stars earlier in the year and the excitement from them was contagious, but I have come away with an even bigger smile than imagined.

This production of Snow White goes all out! There are pyrotechnics, beautiful costumes & set and the choreography and script provide something for all of the family to enjoy, with big song and dance numbers and lots of comedy.

The fun of going to a panto as an adult for me is the realisation of how much innuendo and adult jokes I must have missed while all whipped up in the excitement of the show as a child. Snow White really will appeal to adults and children who love a silly joke and a laugh.

There is a really funny DVD scene where belly laughs from adults were heard from all around the packed-out theatre, while the children laughed and watched on obliviously to some of the more riskier jokes. There are many parts like this which the cast execute marvellously with some cheeky tongue-in-cheek looks.

Jessie Wallace who is best-known as Eastenders’ Kat Slater, plays Queen Lucretia, Snow White’s wicked stepmother. Jessie is exactly what a wicked queen should be – a fierce, glamorous, confident powerhouse with attitude.
Jessie manages to captivate the audience from the moment she steps on the stage – not an easy job with so many children present I’m sure. The writing has, as we would expect played up to her Eastenders’ character with lots of relevant jokes, but it is her scenes with the prince that are stand-out. The chemistry and banter between her and all principal cast members is a happy medium between “is that a corpse or is it in the script” that we all love from a panto. Jessie also gets to have a couple of big song numbers which are enjoyable for all.

Pete Firman as Muddles (Snow White’s longtime lovesick best friend), is another real treat to this cast, holding the panto together while keeping us all entertained with his comedy and magic. One lucky child even gets to go up on stage and help out with a magic trick, but watch out adults, Pete may well get you to help out too.

Jason Sutton plays the saucy Nurse Nancy flirting with the audience and keeping the saucy jokes coming, Jason definitely gets the best costumes with all the glamour and glitter, and his many costume changes keeping everyone engaged.

Now I wouldn’t be doing my job if I didn’t mention the handsome prince – West End favourite Oliver Tompsett plays Prince Benedict of Bromley – if you fancy a bit of eye candy then look no further. Oliver looks and sounds like he walked straight out of a Disney fairy tale, no wonder Jessie Wallace looks like she is having lots of fun trying to ravage him while tearing his shirt off. Their onstage chemistry is spot on and they both get to sing and be part of big song numbers which sound and look awesome. 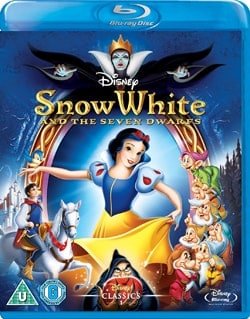 All the cast really are spectacular, and I have to mention the children on the stage from the Laura Bruce Dance Academy who are adorable in every way.

My only doubt in the panto is the creature who appears in the mirror, the graphics are fantastic and it works in the panto but I could see one or two of the younger children turning away, possible scared? But in saying that, I also overheard in the interval some 8/9 year old boys saying how cool it was, so I guess that one is just down to taste.

I’m giving Snow White and the Seven Dwarfs 5 stars, and I think most of the children in the theatre would give it 5 too judging from how well-behaved and captivated they were during the show, but as I stated before this is a panto with something for everyone not just for the children.

A slick beautiful up to date Snow White and the Seven Dwarfs with a class cast and oh so many laughs.

Snow White and the Seven Dwarfs is spectacularly brought to life with an abundance of comedy, sensational song and dance numbers, fabulous costumes and stunning scenery.

Star of stage and screen Jessie Wallace will be joined by comedian and magician Pete Firman as Muddles and hilarious panto dame Jason Sutton as Nurse Nancy.

Throw in a magical Mirror, a beautiful princess, a handsome prince and plenty of audience participation as we outwit the Wicked Queen and let love prevail in this glittering festive treat for all ages.

Titus Andronicus is not usually a comedy, it is usually a bloody, villainous and vengeful tale, but tonight it is a comedy and a rather amusing one at … END_OF_DOCUMENT_TOKEN_TO_BE_REPLACED

This show is not without clichés - there are three of note in this production. Firstly, the French horn of the show’s title is personified, speaking … END_OF_DOCUMENT_TOKEN_TO_BE_REPLACED

There’s very little in the way of set in this show: aside from chairs, a few crash barriers and at one point, a red carpet, the actors’ movements … END_OF_DOCUMENT_TOKEN_TO_BE_REPLACED

South African born, but raised on the Isle of Man, Pierre Novellie is a true raconteur rather than just another 'stand-up' comedian. He says about his … END_OF_DOCUMENT_TOKEN_TO_BE_REPLACED

This show, Willy Hudson began by saying, is about himself. It is written by himself, is directed by himself and executive produced by himself. Almost … END_OF_DOCUMENT_TOKEN_TO_BE_REPLACED