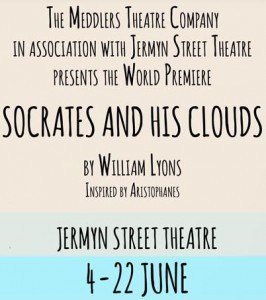 Socrates And His Clouds by The Meddlers Theatre Company, Jermyn Street Theatre

The playwright and philosophy teacher William Lyons has loosely based his new play upon Aristophanes’s Clouds. Inspired also by Plato’s Dialogues, he has given a new twist to the great man himself which alters both the interaction between the protagonists and the overall ambiance of the play. Rest assured, an in-depth knowledge of philosophy is not a pre-requisite to enjoy this performance; the writing is intelligent but not highbrow and the humour and themes are widely accessible.

The plot remains broadly the same as that of Clouds; Strepsiades, an aging bricklayer is beset by troubles: his son, Phidippides, is a good for nothing layabout who fritters all of his father’s hard-earned money away on horses and alcohol; as if that weren’t enough stress for one man he is also being followed by a gaggle of mysterious women who insist on waylaying him in the street and singing to him about his life. While he can do nothing about the women, he can see a solution to their debt problems; Phiddy shall attend Socrates’s academy, to learn “ologies and onomies”, and most importantly how to argue his way out of financial embarrassments. Phiddy being seriously unimpressed with the idea, his father takes himself off to the academy to learn more, and is introduced to Socrates himself. This encounter sends his life, and that of his son, spinning off on a new and unsettling path. Things will never be the same again. Corruption, greed, politics and morality are touched on and debated; all themes which are as relevant in today’s society as they were in the time of Socrates.

In the hands of Mr Lyons Socrates is no longer the amoral, shallow and slightly ridiculous character portrayed by Aristophanes, which Socrates himself claimed was so prejudicial to him during his trial. The individual we meet here is flamboyant, certainly, but far from ridiculous. This is a man trying valiantly to retain his good humour despite being beset by woes: legal and physical attacks from his enemies; severe provocation from certain students; his own personal and moral doubts and dilemmas over his words and actions. Alexander Andreou, despite being surprisingly young and vigorous for a man who was nearly seventy by this time, plays him excellently; beaming one moment, petulant the next, deeply sorrowful the moment after that. His uncertainties and fears are deeply moving.

It is very easy to empathise with Paul Hutton’s Strepsiades too. His frustration with his son is believable and he always manages to remain just the right side of pathetic. His superbly comic mannerisms and timing bring light relief to a show which could otherwise drag just a little. Jack Montgomery, as his son Phidippides, was appropriately loathsome and arrogant, although with a slight whiff of the beatnik about him in his quiff, clothes and constant use of the word “Daddy-O”, which made him seem surprisingly dated in what was otherwise a thoroughly modern play.
The Fates – for such I assume the chorus to be – were charismatic, entertaining and pitch-perfect on rather demanding melodies.

The setting and props were simple but effective – blue backdrop decorated with fluffy white clouds and a marvellous mobile bath for Socrates. However for such a minimalist set the cast seemed to spend an unconscionable amount of time shuffling polystyrene pillars around, often, it seemed, to very little purpose. Karolina Spyrou’s lighting worked wonders however, being especially effective during Socrates’s thought-provoking shadow story.

The main problem with Socrates and His Clouds is that it never seems to have the courage of its convictions in any one direction. It is funny, certainly, but not rib-achingly so. It is occasionally slightly crude, but never achieves the unapologetic bawdiness of Aristophanes’s original. There is potential there for extreme melodrama and pathos in Strepsiades’s unravelling and his final, desperate excoriation of both Socrates and the Gods themselves, but instead the denouement feels timid and half-hearted. Despite the cleverness of the writing and the excellence of the acting, the overall feeling at the end is therefore one of vague dissatisfaction.

One of the principal characteristics of this Socrates is his propensity to ask questions; in his philosophising he tends to asks more questions than he answers, and the same could be said for this play.

Harold Shipman, known to his many patients, family and friends as ‘Fred’, was Britain’s worst serial killer. The official inquiry into his crimes … END_OF_DOCUMENT_TOKEN_TO_BE_REPLACED

Being one of Arthur Miller’s best-made and most challenging plays, The Crucible is also one of his most frequently performed. I was going to say … END_OF_DOCUMENT_TOKEN_TO_BE_REPLACED

To be fair, Linda Lavin called her concert Love Notes, there’s an album of the same name, and that’s more or less what it was about - variations on … END_OF_DOCUMENT_TOKEN_TO_BE_REPLACED

Noughts & Crosses is a euphemism for blacks and whites. The Noughts are the whites and the Crosses are the blacks. In the world of the play, the … END_OF_DOCUMENT_TOKEN_TO_BE_REPLACED

This ‘juke box’ musical offers highly polished, undemanding, feel-good entertainment, showcasing, as it does, 30 songs dating from the 1960s to the … END_OF_DOCUMENT_TOKEN_TO_BE_REPLACED