Sovereign Song by CrushRoom is an immersive theatre show in partnership with established venue COLAB, which leans heavily on an inspired premise for momentum and humour, and at moments delivers a real punch. 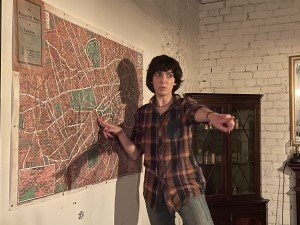 South London neighbourhood Elephant and Castle has made the only sensible response to Brexit and daily life on ‘Normal Island’ and declared itself an independent state. Heavy emphasis is made of ‘recreational rights’ (read: drug decriminalisation) being strongly defended. We, the audience, are applicants for citizenship, driven to immigrate by a variety of reasons, from tax evasion, to snack-bar preferences, but mostly a desire for EU passports that will allow us to get the hell out of Britain.

The application process involved everything from an eccentric quiz, interrogation about our adopted identities, and proving our loyalty to the newly-founded nation. That meant shifting between operations in different areas of the building, working together as a group, in our pods, and on our own. Role-playing, imagination, artistry and music all feature highly.

So far, so younger-generation-skewed. And this production has vitality and youth in spades. From the comedy stylings (and musical talent) of the orientation videos, to the frenetic (and increasingly intense) activities the immigration agents have us undertaking, this production is young at heart.

Sovereign Song is firmly at the active end of the immersive theatre spectrum. We are not wandering around observing a narrative playing out in a site-specific space, but driving the direction it takes. Yet the integration of this choice felt sporadic, with much of our time devoted to tasks that felt slightly arbitrary and didn’t turn out to go anywhere. Active participation is wonderful, and can be the element that elevates immersive theatre to a whole new art form – but if you end up feeling you’re toiling away at something ultimately forgotten, it’s the opposite of being a participant. Instead, some parts felt like reaching the end of a traditional play, and realising you spent the last twenty minutes composing a shopping list rather than watching the action.

At other times, however, the participation and enthusiastic acting came together brilliantly, and a group effort steered the fortunes of the young nation in ways that would resonate forever through Elephant and Castle’s imagined history. The final decision-making set-piece was neatly combined with a snappily improvised section, which allowed the audience’s creativity to shine and be reflected back. Your mileage may vary – always the caveat with these participant-led shows – but it is also a function of how well we were all brought into the ‘game’ that people felt free and open to shout out madcap suggestions, steering what happened next.

This is a show about the creation of a new community, with strangers coming together as one. Placing us in pod ‘bubbles’ for Covid-safety was, of course, a necessity, but it hampered the interaction and ultimately limited the extent of the bonding. It was disappointing, and not something which could easily be overcome, that this meant I didn’t feel the family and fellowship for my sibling Elephantonians which was surely the ambition. That was a shame, because glimpsed but not quite achieved was a message about what it means to become one people and, ultimately, belong.

The fate of the nation rests in the audience’s hands as they take control of this interactive spectacle. Will you lead an unstoppable rebellion, lead your fellow patriots to safety, smuggle yourself under the radar, or succumb to the oppressive tyranny of paperwork? The choice is yours, but remember: no man is an island.

As if there weren’t already enough drama in his life, off the field and on, an intriguing stage play tackles, firmly but fairly, a lost weekend at the … END_OF_DOCUMENT_TOKEN_TO_BE_REPLACED

Earlier this year, drag herstory was made when for the first time, one of the queens in the Drag Race UK “Lip Synch for Your Life” portion of the … END_OF_DOCUMENT_TOKEN_TO_BE_REPLACED

I could wax lyrical about the plausibility of a scenario like that of The Interview taking place in this day and age. We’re not told exactly when the … END_OF_DOCUMENT_TOKEN_TO_BE_REPLACED

It’s convoluted, and not just because there’s a play within the play. Clare (Kate O’Flynn) and Felice (Zubin Varla) are siblings and are actors on … END_OF_DOCUMENT_TOKEN_TO_BE_REPLACED

In a rigorous debate about everything and nothing, For (Hassan Govia) and Against (Jess Pentney) are at least willing to continue discussions with one … END_OF_DOCUMENT_TOKEN_TO_BE_REPLACED