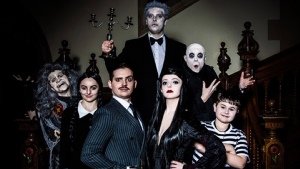 Working as a performer in the world of theatre, I know all too well how much goes on to create a finished show. Hours and hours of commitment, months of rehearsals and years of pre-planning are something you just accept is part of the process. So to turn up and watch a suberb show, with brilliant actors, wonderful choreography, fantastic songs and amazing sets and costumes – and then to be told it was all done in only EIGHT days, is nothing short of breathtaking.

Vivo D’Arte return for a third consecutive year of ‘Stage Experience’ at Aylesbury Waterside Theatre. The theatre arts training company collaborate with the theatre and the district council to give children and young adults the opportunity to perform as part of a professional quality show and experience something most can only dream of. This year’s show is apparently their most ambitious yet and having seen what they have pulled off I don’t doubt that for a second!

Unfortunately the first half of the show was quite hard to follow down to technical issues. The sound was so poor that the majority of the dialogue and lyrics were lost. The beginning of almost every line was missed as the timing of turning on the microphones seemed to be delayed, and the orchestra sounded great but drowned out the vocals – again due to mismatched volume levels. The second act was a lot better (although still not perfect) and I am sure the problem will not be repeated for the rest of the run, but I was really disappointed to miss so much of what was quite clearly well delivered funny and clever dialogue and lyrics. That I am pleased to say is my only negative though, as the talented young people on stage more than made up for the issues.

The huge cast of 150+ ranging from 6-25 years old were all committed from start to finish and not a single one looked out of place or gave any less than 100%. It’s hard to pick out individuals as the cast were such a tight unit, however special mentions go to James Penniston and Casey Bird as Gomez and Morticia respectively, who had wonderful chemistry with each other and fully epitomised what you expect of their characters. Penniston’s frequent side jokes and breaking of the forth wall made him a clear audience favourite, and Bird’s cutting remarks with perfect dry delivery also drew audience plaudits throughout. Alfie Glasser as Fester was also superb and full of energy, but the two real stars for me were Felix Forsyth as Pugsley, and Molly Durston as Wednesday. Forsyth has the comic timing and stage presence of someone far in excess of his years and experience, his subtle
expressions and side quips had me in stitches and his moments of deep emotion were truly touching. Durston is 100% a star of the future, do not be shocked if her name is gracing West End stages very soon. Her voice is stunning, her characterisation flawless, and she is simply a delight to watch perform – certainly one to watch out for.

Huge recognition must also go to the 50-strong crew backstage, as the sets, lighting and props were all amazing. The costumes were even more incredible – the attention to detail here in particular (with each and every ensemble member being a different recognisable character – a subtle but massively impressive element) really blew me away. Managing over 200 people is definitely no mean feat, so congratulations go to the director (Amy Dunstall), choreographer (Emily Scott) and producers (Dan Cowtan and Jo Penniston) for pulling off such a outstanding show.

Overall the show was fabulous. Sometimes I had to sit back and force myself to remember that it was actually an amateur level show with a cast of mainly children that I was watching. That excused the rather heavy footfall on entrances and exits and the slow and clunky set changes, but aside from those small things, nothing made the performance feel any less than a fully professional production. When I was sent my press pack, I read the tag line underneath the poster which said “proudly supporting the local talent of tomorrow” and that is exactly what, or more accurately who, I witnessed on stage last night. Go and watch the ‘talent of tomorrow’ perform The Addams Family – you will not be disappointed.

Wednesday Addams, the ultimate princess of darkness, is all grown up and has a shocking secret that only Gomez knows. She’s fallen in love with a sweet young man from a respectable family. With his cherished Morticia in the dark will Gomez manage to keep his daughter’s secret until the two families meet for a fateful dinner with hilarious consequences? Join them, plus Uncle Fester, Lurch, Pugsley and more for a heart-warming story of love, family and friendship… with a twist!

Featuring a live orchestra and extraordinary original score by Andrew Lippa, The Addams Family is sure to entertain whether you are 7 or 107!

This happens to be a timely production: employment has hit the headlines again at the time of writing, this time because of the concept of ‘quiet … END_OF_DOCUMENT_TOKEN_TO_BE_REPLACED

An opera (well, technically, an ‘opéra comique’, as there is spoken dialogue) in a relatively small space like the Charing Cross Theatre calls for … END_OF_DOCUMENT_TOKEN_TO_BE_REPLACED

Shoes, one would have thought, are fairly recession-proof. The problem for Charlie Price (Joel Harper-Jackson, reprising the role he previously played … END_OF_DOCUMENT_TOKEN_TO_BE_REPLACED

The descriptions of what happens in this show are so vivid that paradoxically they leave nothing to the imagination – and, at least at the performance … END_OF_DOCUMENT_TOKEN_TO_BE_REPLACED