Home » Reviews » Steve and Tobias Versus Death at the Pleasance Theatre

It’s quite a feat, given the parameters of the smaller studio space at the Pleasance Theatre: fights going on between humans and zombies, with characters coming very close indeed to members of the audience – sit in the front row in an unallocated seating arrangement at your own leisure, or indeed peril – but without ever touching, let alone striking, any patrons. It’s borderline anarchic, but in a good way, and refreshingly doesn’t take itself too seriously. Stephen (Sebastian Gardner), as his younger brother Tobias (Daniel Kettle) calls him – rather than Steve, as per the show’s name – is, in some ways, a stereotype: a boy who won’t admit to any display of emotions even if his alternative explanation of what’s happening is beyond absurd. 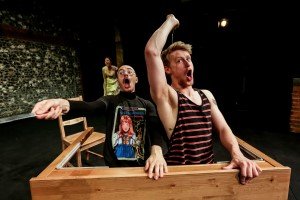 Then again, ‘beyond absurd’ pretty much sums up Steve and Tobias Versus Death. Who wins in this battle would, alas, be giving too much away, though it’s not the longest of fights, with the narrative spanning one highly eventful night. The boys’ mother (Margherita Deri) is a wordless character, which is not the same as a silent character – indeed, there’s more noise from her than there is from everyone else. The rest of the characters are not assigned names, and are let in to the house as curiosity gets the better of the boys time and again.

It does, admittedly, get a little repetitive: more screams, more panic, and more retaliation. The boys, to their credit, are up for a fight each and every time, with the relatively timid Tobias gaining confidence. The safest option, Stephen decides, is for them is to stay at home rather than venture out, given what happens to a schoolgirl (Julia Bird) who left her own house to look for her father: her mother, for reasons explained in the narrative, isn’t around anymore. Then there’s a lollipop man (Harris Allen) and a twenty-year-old woman (Marysa Finnie) – the latter is, at least, a source of coherent conversation.

Perhaps inevitably, I felt taken back to those uncertain times a couple of years ago when staying at home was, with certain exceptions, mandatory – with stories of hospitals being overwhelmed with patient admissions, I wasn’t inclined to go out unless absolutely necessary. I liked the way in which the production referenced the pandemic without explicitly doing so (and without necessarily intentionally doing so either). Watching this show, seeing the boys being repeatedly at risk of becoming zombies themselves, rarely has the phrase ‘stay safe’, not used in the show, seemed so apt on stage.

It is not for the squeamish – there’s a lot of fake blood, and the make-up on the zombies is very convincing. At the heart of Tobias’ personal struggle is the feeling, with some justification, of being unloved and unwanted, with will doubtless resonate with some in the audience. In all the laughter there’s an underlying message of strength and solidarity with childcarers. The possibilities with a dystopian other-worldly comedy are almost endless, and the production does well to exploit some of these in an imaginative, intriguing and surprisingly insightful piece of theatre.

Tobias hates mash and Steve hates Tobias, but when they discover their mom to be patient zero in a world of flesh-eating zombies, the torn-apart brothers get pieced back together, only to be torn apart all over again. Steve and Tobias Versus Death is heading to the Pleasance Theatre following the cancellation of its VAULT Festival performances and is a comedy about two brothers trapped in their living room during a zombie apocalypse. Under-pinned by a deep sense of tragedy and fuelled by meticulously choreographed fights, we follow two brothers as they care for their infected mother, fend off the incoming undead, and mend their fractured relationship. Improvised comedy and a dystopian backdrop collide to tell the nightmare story of an absentee father, a bed-ridden mother, and an apocalypse bursting through the door.

Handel’s 1738 opera Serse (or Xerxes) is an exploration of power, love and human frailty. King Serse falls in love with the voice of his brother … END_OF_DOCUMENT_TOKEN_TO_BE_REPLACED

Lea Salonga has her fans. She also has some superfans, the ones who yell, “I love you Lea!” at almost every opportunity. If that wasn’t enough, there … END_OF_DOCUMENT_TOKEN_TO_BE_REPLACED

I have no hesitation in saying that the 1952 movie “Singin’ in the Rain” and its 1985 stage version is one of the greatest musicals of all time, … END_OF_DOCUMENT_TOKEN_TO_BE_REPLACED

There are, Maria Caruso was keen to emphasise in a post-show discussion, no wrong answers when it comes to responding to Metamorphosis or even … END_OF_DOCUMENT_TOKEN_TO_BE_REPLACED

Children of the Windrush generation, sisters Dawn and Marcia, grew up in the 1980s. In Roy Williams’ new play Dawn is shown struggling to care for … END_OF_DOCUMENT_TOKEN_TO_BE_REPLACED