Postponed, as many productions were, due to public health restrictions, Stigma is a deeply personal story spanning much of Luis Amália’s life (or at least a character played by them of the same name – some details might have been changed to protect people’s identities and all the rest of it). Growing up, they were more interested in gymnastics than football, though their father insisted they join their school’s football team. Labouring the point slightly (albeit to great comic effect), Amália performs gymnast moves with the sort of flexibility and grace one sees watching gymnastics at the Olympics, but several attempts at keepie-uppie failed spectacularly. 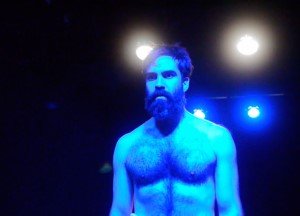 This, perhaps stereotypically, though convincingly nonetheless, give rise to questions about whether they prefer the company of boys or girls. They were, in their own words, “the mascot”, which may explain why they are not exactly high school boyfriend material, but it is not until later that they work out their sexual identity.

Starting off relatively slowly, the production sufficiently varies in pace. There’s a discourse about the achievements of the Spanish gymnast Esther Moya, who won a bronze medal in the 1998 Junior European Championships but didn’t quite manage to bring home any medals in her adult career. Another scene talks about body hair and the peer pressure that Amália came under to be clean-shaven – and not just with regards to their face.

Those subjects, and others, would on surface-level make for a jarring and discordant experience, though here it gradually becomes evident there is an overarching theme going on: there is more to life than what others deem to be success. To take an example, not in the show, did the England men’s football team return home as losers, or as finalists? To use one that is in the show, is Esther Moya (who, admittedly, I hadn’t heard of before seeing this production) any less of a significant person for coming fourth in miscellaneous international competitions, as opposed to first?

With the Olympic Games currently in progress at the time of this production, Simone Biles is referenced in the show. Biles withdrew from further participation in the (postponed) 2020 Summer Olympics, because of what she called “the twisties”, a form of sudden and unexplained loss of gymnastic skill which other gymnasts have confirmed as something they have also experienced. In an emotional post-performance speech, Amália paid tribute to her ability to know her limits and not push herself beyond reason just because other people think she should have carried on regardless. It is something for influential people in the entertainment industry to consider, with a long hours and deadline pressure culture that still remains.

There is some deep level thinking in amongst all the humour: the show borders on observational comedy when it comes to other people’s actions and behaviours. The key point (at least for your reviewer) is that we all have our own lives to live, and the production is something of a celebration of uniqueness, whether or not there is any silverware to show for it. It’s a quirky show, but an encouraging one.

A journey through the personal experiences of a queer non-binary body, the Floor final in the Women’s Gymnastics at Sydney Olympics and the desire

This isn’t the first production to go down the road of referencing a one-star review of their show (from a different publication, I hasten to add). … END_OF_DOCUMENT_TOKEN_TO_BE_REPLACED

Two sisters reunite after the death of their mother, and secrets pour forth. Robert Holman’s new play gently exhibits talented classical acting in a … END_OF_DOCUMENT_TOKEN_TO_BE_REPLACED

Everyone’s vexed in this show, though some have clearer reasons to be than others. Mrs Driscoll (Tameka Mortimer) is struggling with a home life that … END_OF_DOCUMENT_TOKEN_TO_BE_REPLACED

The penultimate production of the 2021 Tête à Tête Opera Festival, based at London’s Cockpit Theatre and showcasing contemporary and avant-garde new … END_OF_DOCUMENT_TOKEN_TO_BE_REPLACED

Relatively Speaking premiered in 1967 and is the sort of show that is, by contemporary standards, very much of its time, and not just because of … END_OF_DOCUMENT_TOKEN_TO_BE_REPLACED