Home » Reviews » Strange The Road at The Hope Theatre – Review 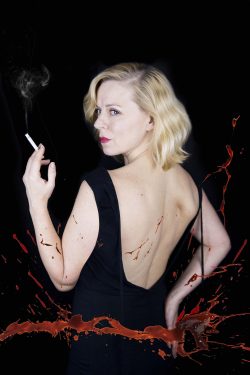 Set somewhere between 1933 and 2033, Lil Warren’s Strange the Road is a noir-y thriller and billed as a letter to Chandler. It is fast paced, gritty and sexy.

The play has a five-strong cast but centres on three characters; Frenchie (Joey Ellis) (who is also the narrator) is a famed storyteller/liar, Verda (Andromeda Godfrey) and Frenchie’s “sorta uncle” Molloy (Pat Koupland). The play begins with the four men drinking in “Marriotts” where Verda, works as a waitress, Frenchie is entranced by Verda but, almost inevitably, she becomes involved with Malloy.

Lil Warren’s script is sparky and her direction pacy. Joey Ellis gives a solid performance as the observant and vulnerable Frenchie, managing to move from narrating to being part of a scene seamlessly. The actors work very well together and Frenchie’s often bristly exchanges with Molloy are excellent.

Koupland manages to convey Molloy’s superior/don’t mess with me attitude well. Andromeda Godfrey gives a sultry performance as the numb, femme fatal, Verda. Completing the cast and giving the play its lighter moments are also well delivered by Rikki Chamberlain (Hughie) and Darren Paul McStay (Randall). I also have to say well done to all the cast who manage to keep their American accents going throughout the performance.

As you would expect with this type of thriller there are moments of strong language, aggression and fights. The fights have been well staged by Rikki Chamberlain. Jayne McVeigh’s movement direction on what is a very small stage is excellent and includes a scene where the cast mimic a jerky silent movie tribute and also swing dance to an atmospheric jazz sound track.

Despite the play’s somewhat inevitable and predictable ending, I enjoyed it.

STRANGE THE ROAD is a love letter to Chandler set in a noir world sometime between 1933 and 2033.
Written in the pulp vernacular, the spare dialogue is matched by a sharp design and style where we are placed anywhere a man with his wits about him has to use them to prevent his own murder…or worse…

FRENCHIE is a famed storyteller “fancy name for a liar”. He falls in love with VERDA, a waitress in the drinking club MARRIOTT’s. Also in the club is his “sorta uncle” MALLOY, so big his feet are “the size of Virginia”.

Always at his huge side are his lieutenants; RANDALL and HUGHIE. Before FRENCHIE can do anything about being in love with VERDA she is taken by MALLOY as his girl.

FRENCHIE needs to weave a complex plan to save the tomorrows of VERDA, himself and his sanity.

It is 2002 – another Royal Jubilee year, and HRH (Mary Roscoe) is due to open a new Science wing in a 'sink' comprehensive where Dr Derek Jones … END_OF_DOCUMENT_TOKEN_TO_BE_REPLACED

Dr Anna LaRosa (Dr Stefania Licari) has a lot to say. Just as well, as she’s the only one on stage in this medical comedy, which largely draws its … END_OF_DOCUMENT_TOKEN_TO_BE_REPLACED

Nikhil Parmar’s one-man show, originally written as a TV pilot, manages to touch on a wide range of themes from Islamophobia to modern fatherhood with … END_OF_DOCUMENT_TOKEN_TO_BE_REPLACED

Handel’s 1738 opera Serse (or Xerxes) is an exploration of power, love and human frailty. King Serse falls in love with the voice of his brother … END_OF_DOCUMENT_TOKEN_TO_BE_REPLACED

Lea Salonga has her fans. She also has some superfans, the ones who yell, “I love you Lea!” at almost every opportunity. If that wasn’t enough, there … END_OF_DOCUMENT_TOKEN_TO_BE_REPLACED