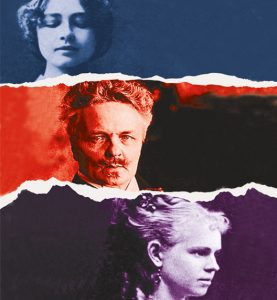 The heavyweight Scandinavian dramatist, August Strindberg, remains an imposing figure. Although 2012 saw the centenary of his death, his is an influence still palpably felt on the stage. A huge source of inspiration for his compatriot, the late Ingmar Bergman, and also other celebrated playwrights such as Ionesco, Pinter and Beckett, his biting and furiously critical analysis of relationships between men and women continue to pay dividends. They are often not for the faint of heart. He took the baton extended by Ibsen and forged his own dramatically violent theatrical path.

Strindberg’s Women is a collection of two of his lesser-known plays (The Stronger and Storm). Whilst they are not of the renown of the likes of Miss Julie and The Father, they are equipped with a stereotypical steely cool, and these plays observe – with acute pessimism – the nature of love and union.

The Stronger is a taut one-act work and the only all-female piece that he ever wrote. It is a monologue that centres on a woman, ‘Mademoiselle Y’ (Alice Frankham), sitting alone at a cafe on Christmas Eve. She is joined by a familiar face, ‘Madame X’ (played by Sara Griffiths) who talks loquaciously and at length, whilst the silence of the lone woman wields a power heavier than all of the sounds emitted from the talking party.

It is an exercise in seeing a woman cast a projection of assuredness before crumbling and allowing her insecurities and fears to break through in painful fissures.

In truth, it is a slight play, but taken in the context and knowledge that it was written for his first wife, Siri, it is perhaps most interesting as an exemplar of the playwright’s biography and an insight into how he viewed his wife. There is historical value there.

Storm is the substantial piece in Strindberg’s Women. It dates from five years before his death and it focuses on the isolation of ‘The Gentleman’ (Paul Herzberg) many years after his young wife has fled from him with his daughter in tow for another lover. He is visited by his brother (Robin Kingsland) who also acts as his confidante. There is a diffidence about the Gentleman. He is quite happy in the purgatory of self-maintained and composed alienation. His life is coloured only by his home help, Louise (Alice Frankham once more). He states plainly that he wants no drama. And yet, life creeps in. The cacophony of sounds that percolate and intrude from the flat above is a source of frustration and anger for him. As matters unfold, it turns out that his ex is located there. She is intent upon making contact once more and it is from here that the characters’ history is unravelled with Strindberg’s masterful touch.

These two plays form an interesting whole. Neither of them would be entirely satisfactory separately and some might charge the whole affair as something akin to a Curate’s Egg, but there is something to be said for having a window into a slightly more nuanced portrait of female characters, which is something that many feel was always missing from this writer’s oeuvre. Strindberg’s Women digs deep and offers audiences a fresh slant on his output.

ANDY JORDAN PRODUCTIONS
and ELYSIUM THEATRE COMPANY
in association with Jermyn Street Theatre present: STRINDBERG’S WOMEN: THE STRONGER and the London premiere of STORM
by August Strindberg
Translated by Michael Meyer
Performed together for the first time in this country, THE STRONGER and STORM, are a testament to the power of Strindberg’s writing. Love and hate, sex and jealousy do battle in an electrifying evening’s theatre.

If the audience were to be exposed to full versions of the seventy-four songs listed in the programme, it would be a very long show indeed. I suppose … END_OF_DOCUMENT_TOKEN_TO_BE_REPLACED

How can a play be both charming and devastating? Through its tight script, abundant humour and pitch-perfect performances, 4th Country manages to … END_OF_DOCUMENT_TOKEN_TO_BE_REPLACED

Britain, so a London cab driver once told me, is obsessed with the Second World War, as though it happened just recently. Power Luncheon would seem, … END_OF_DOCUMENT_TOKEN_TO_BE_REPLACED