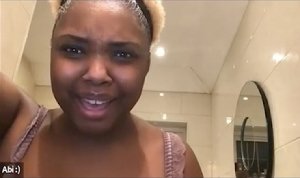 An entire series could be made out of this scenario. Sarah (Sharon Duncan-Brewster) is FaceTiming her sister Abi (Alexandra James) even though they are in the same house: the show is set in either the relatively recent past or the relatively recent future, at a time when weddings were permitted without the mere presence of other people being in the same room causing a potentially life or death situation. Abi has locked the door to the bathroom, which is quite reasonable, given the sort of things people tend to do in bathrooms, but Sarah wants to talk. Now.

As a narrative device, it works initially, but it becomes increasingly bizarre that two sisters who voluntarily agree to be in the same house would continue to speak on a video call instead of hanging up and continuing their conversation not long after in person. (The answer is plain and simple: in short, the play was shot in lockdown.) 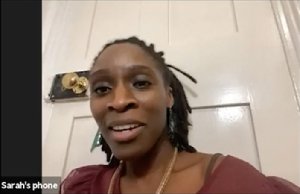 In some respects, there is nothing unusual going on – the siblings agree on what they agree on (a lot) and disagree on what they disagree on (also a lot). That they have not had much opportunity, due to work commitments and – quelle surprise – wedding planning, to speak to each other, opens the door for a lot of exposition and background details that the characters explain to one another, and therefore to the audience.

The grass is always greener on the other side, as the old adage would have it: what Abi sees as Sarah’s perfect life with a stable job and a place she owns rather than rents is, for Sarah, existing rather than living, with a busy and stressful job and a crippling mortgage. Likewise, Abi’s move to ‘the big city’ isn’t all it’s cracked up to be. The conversation is never explosive, and never resorts to personal remarks – and why should it? After all, this isn’t a soap opera. The civility here is, I must admit, a breath of fresh air compared to so many other productions full of tension and strife.

It’s an intriguing dialogue, and as I started by saying, it’s one that could be substantially expanded. What happens after this conversation? How does the wedding go? The play seems to raise more questions than it answers, but it is nonetheless an engaging and agreeable experience.

Two sisters clash over wedding preparations.
Filmed on Zoom and released every Tuesday at midday from 19 January until 16 February 2021, all pieces will be captioned and audio described. A new theme tune has been composed by sound designer Jonathan Leitch.

Combined with these plays, every Thursday from 21 January, Graeae will release a short, filmed conversation with Deaf artists in British Sign Language, discussing in more detail the themes from that weeks’ play.

The plays and BSL conversations will be available to watch through Graeae’s YouTube channel (www.youtube.com/graeaetheatrecompany) and website (www.graeae.org).