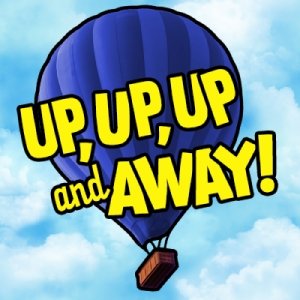 My twin 7-year-old co-critics have lockdown fatigue like everyone else. Four months since the closure of theatres, museums and schools, the thrill of sheer resourcefulness no longer has quite the frisson it did back in March. The first Zoom gathering of their Year 3 class promised longed-for sociability but produced cacophonous frustration and the novelty wore off about as quickly as my delusion that I could make all home-schooling lessons riveting. So when the time came to sit down for Up, Up, Up and Away!, for which they had volunteered their time and imaginations upon seeing the trailer some weeks before, I had to channel my best Judi Dench in Staged and remind them that they could have said ‘no’ but they said ‘yes’ and therefore they were going to blooming well do the job because that’s what we do in the theatre!

It proved to be one of the most gratifying moments of plagiarism-cum-parental-coercion in my life because within a minute of being placed before my laptop (drawn away from another, bigger, broadcast screen I must confess), they were rapt. It was a great pleasure to once again see my children entranced by immersion and stimulation rather than behold the digitally hypnotised/lobotomised gaze I’ve come to accept as the price of remaining employed amongst school closure this year.

The creative team behind this work very astutely realise that they must find virtues in the medium of Zoom for children’s entertainment and not try to approximate what has no proxy. Whereas consuming recorded performances from the National Theatre leaves me melancholy because it only stirs up my deep yearning for the true theatrical experience, Super Stories with City Actors sparked joy and awe within all three of us because it retains all the power of live, interactive story-telling without pretending it’s existing anywhere else other than where it is. As such, watching a performance of Up, Up, Up and Away! is engaging and fun on its own terms as a new sort of genre rather than a pale imitation of something else.

With equal measures of physical participation and the best permission to be rowdy a la panto, writer and live vision mixer George Rennie has managed to create a world where children want to go: like a choose-your-own-adventure interactive game but with a sense that it is truly happening in the here-and-now. Displaying both disciplined preparation and rhythmic spontaneity, Ryan Duncan (as The Apprentice) and Rowland Stirling (multi-rolling as Captain Calamity, Timoflea and The Great Zucchini) bounce off each other and the audience in something much more than just larking about with some kids on Zoom. They are fine comic actors playing the broad laughs that kids adore and are reading the Zoom-room with the same skill seasoned players work an auditorium.

Whilst my kids were giggling, shouting and totally drawn into the story and its setting, I was bowled over by how George Rennie as the live vision mixer worked the screen and scene changes with an acumen to rival live multi-camera direction of a Wimbledon final. Directing live broadcast takes nerves of steel and a musical maestro’s precision; managing comic timing across varying broadband speeds with an uncast group of kids and their parents who’ve paid more than a Sky pay-per-view movie for a ticket pretty much deserves the accolade of genius. Executing scene changes with puppets, animation and layers of background felt like an almost death-defying performance endeavour and he nailed it! Jessica Dives’ music is equally as impressive and hard-working. So catchy are the tunes, that my kids were humming the anthem before the performance – such that I assumed this was a classic with which they were already familiar when, in fact, everything about this show was brand new to them but is now enduring.

Up, Up, Up and Away! is more than just a breathtaking example of pandemic problem-solving, it has all the ingredients of a modern classic. As small-scale live outdoor theatre is about to make a comeback, I’d love to see more work from this show’s cast and creators, a collaboration of Oxford’s Creation Theatre and Leeds’ Carriageworks, because this team clearly haven’t met an obstacle they can’t overcome with sheer quality, determination and joie-de-vivre. But even should there no longer be obstacles to the traditional theatrical experience, this production deserves to remain in the children’s canon. Or, as my 7-year-olds said: it’s ‘hilarious and adventurous – amazing!’

Up, Up, Up & Away
It’s a live, interactive online performance hosted via Zoom. Running time is approx 50 minutes. It follows the escapades of Captain Calamity and his able Apprentice in their big, blue, hot air balloon and is perfect for children 3 – 8 and their families! The show really is proving to be a hit with families on lock down, featuring original music, puppets and much technical wizardry, and really enables people to experience the magic of theatre from the safety of their living rooms!