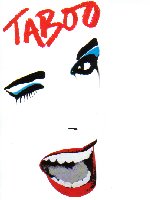 Having heard good things about the current production of Taboo in its Brixton bolt-hole, I was looking forward to experiencing this site-specific musical myself. Tucked away in South London, the Brixton Clubhouse is a large bar room converted into its current theatrical state for the run of Taboo, theatre doesn’t get more intimate than this. The action happens right at the audience’s feet making the job for the actors harder I think, as there is nowhere to hide, and nobody can get away with blanket emotion or not being 100% immersed in character, and thankfully, I was not disappointed.

Following the story of George O’Dowd through the eyes of a young, headstrong photographer thrown into the anarchy of a 1980s artistic commune, Taboo shows the glitz, glamour and grit of a generation fuelled by decadence. From start to finish, Taboo pulls the audience through such a range of emotions, from laughing at the audacity of Marilyn, played by Adam Bailey, to being moved by the turmoil of Josie, played by Sarah Ingram. Ingram incidentally, is one of the strongest members of the cast with outstanding vocals and honest, raw emotion. In fact there is not a single weak link in the whole cast. Alistair Brammer plays the budding photographer Billy, with sincerity and drive, and a great voice to match. Niamh Perry matches his talents as the feisty Kim, performing with such emotion that I believed every word she said. Reprising his role as Philip Sallon, Paul Baker delights the audience with his antics but also pulls at their heartstrings in his more sensitive, and sometimes harrowing scenes.

The ensemble supports throughout and gives Taboo the feel of a collaborative performance, everyone relying on the support of others and it’s a pleasure to watch. Katie Kerr shows real strength with a powerhouse voice as Big Sue, overseeing the frivolous life of artist Leigh Bowery, played with flair by Zeph Gould. Choreography, though minimal is appropriate, and director, Christopher Renshaw, incorporates the audience seamlessly.

The standout performance of the whole evening however is Matthew Rowland. What a professional debut! As Boy George, Rowland is spectacular. He embodies the star right down to the last detail and the audience lives through the whole story with him, from the high points of his career to the low points of drug-fuelled rage and heartbreak. I cannot fault his performance.

And it seems that I cannot fault Taboo as a whole. Nestled away above the noisy streets of Brixton, it is a moving, powerful production, worthy of every piece of positive press it has received.

Like The Merchant of Venice, with its profound antisemitism, and the misogynistic Taming of the Shrew, Othello is one of Shakespeare’s most … END_OF_DOCUMENT_TOKEN_TO_BE_REPLACED

If the situation in Have I None is really going to be what the future is like, I don’t want it. Sara (Abigail Stone) is cooped up at home, and the … END_OF_DOCUMENT_TOKEN_TO_BE_REPLACED

Male bonding contains seeds of sacrifice and understanding to rival any Christian religion's tenets of divine hope and compassion. And in a play about … END_OF_DOCUMENT_TOKEN_TO_BE_REPLACED

I hugely enjoyed The Shawshank Redemption. This 2009 adaptation by Owen O’Neill and Dave Johns is based not on the 1994 Columbia Movie but on Stephen … END_OF_DOCUMENT_TOKEN_TO_BE_REPLACED

This play is, I must admit, intriguing stuff. Michael Aleen (Gwithian Evans) is a patient in a secure psychiatric hospital - and that is the correct … END_OF_DOCUMENT_TOKEN_TO_BE_REPLACED