Stacey Solo (Tamar Broadbent) may well be an all-American criminal investigator, though the sense of irony and sarcasm is often inherently British. Not that narrative detail really matters too much here – Solo’s ex-husband is, the audience is reliably informed, underdeveloped as a character, with an insufficient backstory. The show has, therefore, cast a critical eye over itself, and has had a blast while doing so. There are some caricatures, such as the teenage son who largely confines himself to his bedroom in his spare time, playing multiplayer computer games, and a ‘nemesis’ who tends to act as the defence lawyer for people Solo seeks to put behind bars who have a sinister streak. 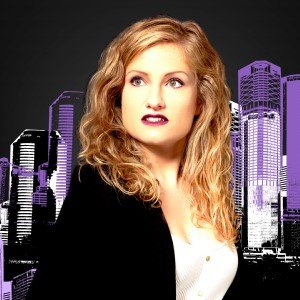 In all the plays on words and descriptions of absurd situations (she has, for instance, a hard ass, on account of a horrific childhood accident which left her with metal plates for buttocks), there’s some telling social commentary on modern society, particularly with regards to how women come under criticism irrespective of what they do. To be a stay-at-home mother means their talents and abilities are not being used in the workplace. To hold down a full-time job means they are not at home as much as they ‘should’ be.

Solo has climbed the career ladder, and is about to gain a further promotion, though a bizarre twist of fate means she is pipped to the post by someone who she didn’t even know was also in contention. The new leader has zero police experience, which seems to be par for the course in some organisations that like to put people in senior positions who didn’t exactly work their way up and gain an intricate knowledge of their industry or sector while doing so. Again, the story is told with great comic effect.

Rather boldly, part of the show relies on interaction with the audience – sit on the front row at one’s own risk and all that – which then results in some improvised verse based on the answers supplied. The result, presumably, is vastly different with every performance. The lighting and sound effects work well to enhance the production, although the art of storytelling remains central. The plot is, frankly, absurd, but deliberately so – I found myself just going with the flow and enjoying the preposterousness of it all.

Mansplaining recordings as a torture device was (darkly) hilarious, even if it smacked of playing episodes of Sesame Street to prisoners at the detention camp at Guantanamo Bay Naval Base: Broadbent evidently had fun mansplaining everyday tasks. There was dancing, there were poignant moments amongst all the laughter, and there was a happy resolution. If there had been singing, this could well have been a musical. A bustling and boisterous show that provides the sort of cathartic laughter needed in these still uncertain times.

Stacey Solo is a strong female lead (detective), about to face the toughest case of her career. A strange set of initials appears at every turn, a woman enters the department with no voice and a man is promoted just because he is tall.

With the help of her boss Sam, a wise old police chief who gives cryptic, mysterious advice, and her enthusiastic, stationary-loving assistant Andrea, Stacey must throw the rule book out of the window and solve the summer of silence, before it’s too late!

This isn’t the first production to go down the road of referencing a one-star review of their show (from a different publication, I hasten to add). … END_OF_DOCUMENT_TOKEN_TO_BE_REPLACED

Two sisters reunite after the death of their mother, and secrets pour forth. Robert Holman’s new play gently exhibits talented classical acting in a … END_OF_DOCUMENT_TOKEN_TO_BE_REPLACED

Everyone’s vexed in this show, though some have clearer reasons to be than others. Mrs Driscoll (Tameka Mortimer) is struggling with a home life that … END_OF_DOCUMENT_TOKEN_TO_BE_REPLACED

The penultimate production of the 2021 Tête à Tête Opera Festival, based at London’s Cockpit Theatre and showcasing contemporary and avant-garde new … END_OF_DOCUMENT_TOKEN_TO_BE_REPLACED

Relatively Speaking premiered in 1967 and is the sort of show that is, by contemporary standards, very much of its time, and not just because of … END_OF_DOCUMENT_TOKEN_TO_BE_REPLACED