It’s quite a story, Ten Days in a Madhouse: Nellie Bly (1864-1922) (Lindsey Huebner) was an ambitious journalist who pushed boundaries because she sought to investigate how women were being treated in various contexts. What she didn’t want to do was write articles on topics that female journalists were largely confined to at the time, such as fashion and culture. By 1887, she found herself doing just that, so she resigned. To cut a long story short, various potential opportunities were denied, at least partly because editors didn’t have any women journalists on their team and weren’t going to start having them at that point. 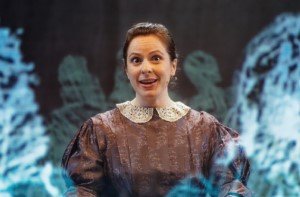 Then there was the New York World, run by Joseph Pulitzer between 1883 and 1911 (the paper itself carried on until 1931), a pioneering paper in a number of ways. It was one of the first papers to publish comic strips, for instance, and in 1913 published a ‘word-cross’ puzzle, generally considered to be the first crossword puzzle published in a newspaper. Bly’s contribution was, in effect, a forerunner of undercover reporting. Challenged by New York World to prove herself to be a worthy correspondent, she set about investigating the rough conditions of an insane asylum – as such places were called back then – on Blackwell’s Island in New York. Let’s just say it would have been an even shorter play if she hadn’t been able to complete her investigations.

The production chooses to tell a nineteenth-century story by deploying twenty-first-century techniques. Patrons are invited to take a pair of headphones before entering the auditorium (these are sanitised before being made available for public use), and the volume can thus be adjusted. It’s unusual – the only other scenario that comes to mind is the ‘silent disco’, where music is played through headphones such that clubbers are able to dance but without noise complaints. It works well enough: I found a comfortable volume level for myself – some incidental music plays before the show to allow patrons to do this. Because everyone else was listening through headphones, it was rare to see audience members talking to each other during the show, and if they did, I didn’t miss a single line of dialogue.

There are a lot of projected images in the show, both still and moving: Huebner in one sense has the stage to herself but engages in conversation with the sort of people one would reasonably expect she would interact with – a senior editor at the newspaper, plus staff and other inmates (a more accurate term than ‘patients’) in the asylum. This is achieved through pre-recorded dialogue – in the hands of this production team, it works remarkably seamlessly, as though there were a group of actors in the flesh on stage rather than digital pictorial representations. A pity, then, that some of the inmates were portrayed with – wait of it – actual balloons, rather than avatars or holograms or whatever was used for asylum staff.

Part of the show is deliberately insufferable. The daily routine of the asylum is repeated several times, with the same dialogue with the same people. Huebner’s Bly eventually lets out some frustration, and while the monotonous nature of what (doesn’t) go on made it difficult to maintain interest, it also demonstrates how the asylum system sought to grind inmates down. If they weren’t insane when they were sent there, the institution made them lose their minds. Not exactly a walk in the park, then, particularly when Bly herself receives the harshest of ‘treatments’ (that is, punishments) meted out to inmates. Some women were sent to the asylum for the most frivolous of reasons – that some of them are identified by name affords them the respect they were evidently denied during their time there.

A real mixed bag, this play – it has a lot going for it, and while it is very slick and sophisticated in many ways, there’s still room for refinement. It is perfectly cast, though – Lindsey Huebner commands the stage with a magnetic elegance that makes it easy to invest in this challenging story.

“I said I could, and I would. And I did.”
1887, New York. Reporter Nellie Bly, the pioneer of investigative journalism, fakes insanity and is admitted to an asylum to expose the treatment of its patients. Her report shocked the world and shone a light on those society had chosen to forget.

Ten Days in a Madhouse is a warning to us all – reminding us that true power is not measured by how institutions impose authority, but by the compassion they show, especially in moments of crisis.

Ten Days in a Madhouse
by Nellie Bly adapted by Douglas Baker
produced by So it Goes Theatre
https://brockleyjack.co.uk/

Handel’s 1738 opera Serse (or Xerxes) is an exploration of power, love and human frailty. King Serse falls in love with the voice of his brother … END_OF_DOCUMENT_TOKEN_TO_BE_REPLACED

Lea Salonga has her fans. She also has some superfans, the ones who yell, “I love you Lea!” at almost every opportunity. If that wasn’t enough, there … END_OF_DOCUMENT_TOKEN_TO_BE_REPLACED

I have no hesitation in saying that the 1952 movie “Singin’ in the Rain” and its 1985 stage version is one of the greatest musicals of all time, … END_OF_DOCUMENT_TOKEN_TO_BE_REPLACED

There are, Maria Caruso was keen to emphasise in a post-show discussion, no wrong answers when it comes to responding to Metamorphosis or even … END_OF_DOCUMENT_TOKEN_TO_BE_REPLACED

Children of the Windrush generation, sisters Dawn and Marcia, grew up in the 1980s. In Roy Williams’ new play Dawn is shown struggling to care for … END_OF_DOCUMENT_TOKEN_TO_BE_REPLACED