Home » Reviews » Tethered at the Lion and Unicorn Theatre | Review

A couple of weeks ago I interviewed the creatives behind Chewboy Productions. As part of the interview, they were telling me about the new show they were working on. The show is called Tethered, and I have just been to see it at the Lion & Unicorn Theatre. Unusually, I’m not going to tell you any more about the plot of the show than was in the press release. I’ll explain why in a moment. 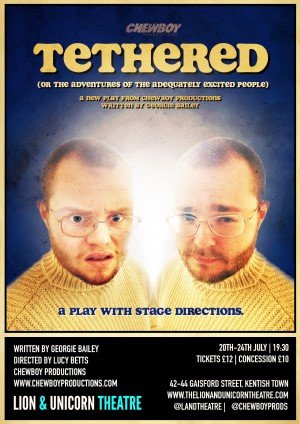 “Sans (Hal Darling) and Moins (Georgie Bailey) are getting saved, after a lifetime of being tethered together. The prophetic printer has told them so, and they’re very excited. Adequately excited. Kind of excited. As it’s not the first time they’ve got a message like this, and the real question is, will it be the last?”

The reason I’ve only quoted the above is that Tethered is a very surreal piece of theatre that has to be seen in order to be appreciated. I also think it’s one of those shows which generates hours of after-performance discussion in the bar as to its real meaning, so me telling you what I thought it meant may be completely wrong, or completely right, or a mix of the two. What I will tell you is that this is a show where you can expect the unexpected. Even from the start as I walked into the auditorium, it was obvious this would be different. In fact, I hesitated walking in as I thought the cast were still setting up and they weren’t ready for the audience. Still, I had walked up the stairs and wanted to sit down so in I went. This was when I knew they had started as there was no flicker of acknowledgement that someone had come into the performing space and plonked themselves down on a seat. The two identically dressed boys sat at opposite sides of the stage discussing the play and listening to various bits of music to see who they would fit in with the plot. As the audience arrived, they carried on ‘prepping’ the show until they finally started, and we entered the world of Sans and Moins or did we? Were Sans and Moins really just Darling and Bailey or vice versa? His is where Bailey’s skill with writing the surreal really kicked in, as we realised that there was a much deeper human story within the amusing tale of two people and a length of rope. There was a palpable change in the audience as the play progressed. Initial laughter and rolling in the aisles gave way to a more intense atmosphere as we went deeper into the world and lives of Moins/Bailey/Sans/Darling. I’m not sure who did the lights and sound, it may have been Director Lucy Betts, everything came together to create the story and feeling of two people tied together both physically and metaphorically.

And I do mean everything. Bailey and Darling have a real relationship onstage (and going by my interview, offstage as well). Don’t misunderstand me, I’m not saying they are a couple or anything, though they may be, but they have that vibe about them of two people that know everything about each other and can react to anything the other does, or maybe even thinks in a way that perfectly serves them and the production. It’s great to see and goes a long way to explaining the well-deserved success of their production company.

When the show ended, and I left the theatre, I was reflecting on what I had seen. In some respects, I could really identify with Moins/Bailey. If I am giving a presentation, I will rehearse and re-rehearse, tinkering with the smallest detail of the slides right up until the moment I have to stand up and do my performance. Luckily for me, I have that final fixed point which means I have to stop otherwise I would continue ad-infinitum. The other thought that occurred was after 18 months of lockdowns, how relevant the story of two people stuck in one location was. Even the thought of the ‘prophetic printer’ with its repeated message of freedom, fits in – think of various government announcements over the last year or so.

If I was summing up Tethered, I would say that, whilst on the surface, it’s a laugh-out-loud surreal comedy of people trapped together, it is so much deeper with layers of nuance and thought-provoking moments which leave the audience questioning who they are and if they themselves are actually tethered in some way.

As they traverse their sparse landscape tethered together by their mysterious saviours, Sans and Moins learn more about humanity, each other and the things that are better left unsaid; leading to secrets being held, a sense of belonging being lost, and a madness created by the cyclical nature of hope.

It’s a show of its time. Well, it isn’t really – it’s a show first produced in the 1950s, with this production placing the action in 1913. The set … END_OF_DOCUMENT_TOKEN_TO_BE_REPLACED

The whole narrative in Lift is almost totally implausible, at least to me, until the penny dropped about two-thirds of the way through. The central … END_OF_DOCUMENT_TOKEN_TO_BE_REPLACED

“Three Decembers is the finest modern opera that I have seen.” So wrote Chicago reviewer Tom Williams, having seen its premiere in 2008, and I can do … END_OF_DOCUMENT_TOKEN_TO_BE_REPLACED

There’s a surrealness to Mission that the production’s own script readily acknowledges, with more than one character admitting, separately, that they … END_OF_DOCUMENT_TOKEN_TO_BE_REPLACED

In June 1988, Bob Dylan set off on what has become known as “The Never-Ending Tour” and apart from a break due to the pandemic, it’s still going 34 … END_OF_DOCUMENT_TOKEN_TO_BE_REPLACED