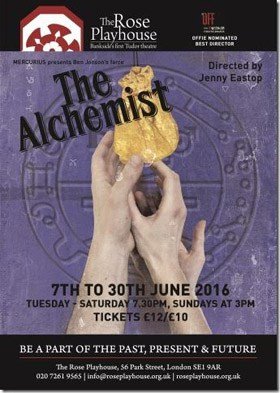 In the 1950s and 60s actor manager Brian Rix put on a series of plays known as the Whitehall Farces. I mention this because, at the time they were considered by the critics of the day to be ‘low comedy’. Its an interesting concept and one that certainly couldn’t be applied to a much earlier play in the ‘farce’ genre, Ben Jonson’s The Alchemist currently being performed in the highly appropriate setting of the Rose Playhouse, Bankside.

The play opens with a massive soundtrack that resonates around the theatre as Face (Peter Wicks), Subtle (Benjamin Garrison) and Dot Common (Beth Eyre) set the stage for their great deception, then break into a fight that culminates in a viscous exchange of insults between Face and Subtle. It transpires that Face is the butler in this house and, whilst his master is away, has gone into temporary business with Subtle and Dot to set up as an alchemist store, offering elixirs, spirit guides and, the most sought after magical thing of all, the Philosopher’s Stone, capable of turning base metal into gold. Thanks to work done the previous evening by Face, they do not have a shortage of customers. There is meek and mild clerk, Dapper (Monty d’Inverno) who is looking for help to ensure he always wins at gambling. Then there is Drugger (Clark Alexander), keen to establish a successful tobacconist business. He is swiftly followed by Sir Epicure Mammon (Jeremy Booth) and his associate Pertinax Surly (Alec Bennie) who wishes to get his hands on the Philosopher’s Stone. Sir Epicure believes everything that he is told, but Surly is suspicious of Face and Subtle and tries to persuade Epicure to abandon his quest. But Face and the team are masters at their trade and happy to deal with, aka take money from, the highest and the lowest of the land, even from the church as seen when Anabaptist Deacon Ananias (Charlie Ryall) arrives seeking the transmutation of goods into gold to be sold to support the church. As each of these seek out the help of Subtle, skillfully managed by Face, their stories become intertwined, especially when a shapely widow is introduced into the mix, and it takes all of the con-artist’s skill to steer their story towards a satisfactory and profitable end for the three of them.

The Alchemist is a very old play, as its language shows, but in many ways is actually very contemporary. Just look at all those people willing to queue up and genuflect in front of Simon Cowell and his team in the shape of instant fame and fortune with little effort put in and suddenly the Philosopher’s Stone becomes the X-Factor. Likewise, how many organisations spend a fortune of consultants to tell them how to run their businesses, even though they probably already know, but don’t have the courage to go with their own feelings. Maybe Ben Jonson was ahead of his time or maybe people are just people and even over 400 years after it was written, the human race really hasn’t progressed that much. Anyway, that is a debate for another place. I have to say, I loved the ending which was quite surprising but, as soon as it happened seem just perfect.

I really loved this production – although I hated the music used at the start and between scenes – and thought it was really well staged. The acting space of the Rose is not massive but, even with a cast of eight running on and off, it never looked awkward or over-crowded. Director Jenny Eastop, makes great use of the space, and the area behind the stage where the Playhouse foundations lie to keep the play moving, and it really does. At 90 minutes straight through, there is not a moment to take breath as the multiple stories are played out. Full credit has to go to Peter Wicks and Benjamin Garrison who as Face and Subtle respectively, are the lynchpins on which the whole play hangs. The two of them, along with Beth Eyre’s Dot, are superb together. Not friends, not even particularly liking each other, the characters manage to keep track of the stories they have woven round each of their victims. All of the cast were great and, I’m going to mention Monty d’Iverno who played Dapper and Kastril. It wasn’t until the curtain call I realised he had played both roles, so convincing was he as these diametrically opposed characters.

So, to sum up. The Alchemist is a wonderful play, as relevant today as it was when first performed in 1610, and this revival is extremely good. The direction and cast are a great match for the convoluted script and the 90 minutes flies past as the story of Face, Subtle, Dot and their rather silly bunch of customers. Being staged in the Rose Playhouse feels like the play has come home and it seems happy to be back.

Slapstick farce meets breath-taking word play in Ben Jonson’s much loved comedy.
Coleridge – “One of the three most perfect plots in literature”
Wealthy Lovewit, fleeing disease-ridden London, leaves his town house safely in the care of his butler Jeremy. But Jeremy grabs the chance to set up a criminal den with two fellow swindlers, promising untold riches and success to the gullible. No scheme is too ridiculous, no dupe left untricked as the greedy of London flock to be gulled. But as the three juggle their increasingly crazy schemes will the bubbling cauldron of trickery explode in all their faces? And what will happen if Lovewit suddenly decides to come home?

Mercurius returns to The Rose Playhouse for the fourth time following the sell-out, 5 star success of A Trick to Catch the Old One and A Chaste Maid in Cheapside and most recently Ben Jonson’s The Devil Is An Ass, chosen by LondonTheatre1 as one of its top ten productions of 2015

The descriptions of what happens in this show are so vivid that paradoxically they leave nothing to the imagination – and, at least at the performance … END_OF_DOCUMENT_TOKEN_TO_BE_REPLACED

As theatre productions go this is a memorable, magical experience filled with heart and love and so many tiny thoughtful details, that I’m not sure a … END_OF_DOCUMENT_TOKEN_TO_BE_REPLACED

There are no props at all in Dog, and yet despite a dog, Roy, being very much a key character, the staging and dialogue are more effective than they … END_OF_DOCUMENT_TOKEN_TO_BE_REPLACED

Be astonishing. That’s Derek Jarman’s exhortation to the world at large and - at the end of the show - to this particular audience. And in this … END_OF_DOCUMENT_TOKEN_TO_BE_REPLACED