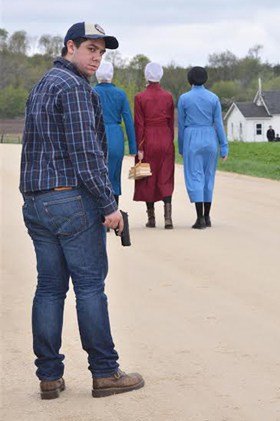 Violent gun massacres in the United States are nothing new. Barely a month goes by without some tragedy happening where someone decides that they wish to go out in a blaze of glory by shooting colleagues/friends/random strangers and then themselves. Each event is horrific in its own right but even for an old cynic like me, the horror takes on a new level when children are involved. So it is with The Amish Project presented at the New Wimbledon Studio by the Saint Mary’s University of Minnesota School of the Arts.

The Amish Project is based on the true story of 2nd October 2006 when a stranger walked into an Amish schoolroom in Nickel Mines, Pennsylvania and then began shooting. The play itself follows the story from the perspective of several people directly and indirectly involved in the murders by Eddie Stuckey (Zachary Hillman). There is Eddie’s wife Carol (Victoria Madigan) and Bill North (Darren Cajipo) a non-Amish man who is very close to the reclusive people – especially Aaron (Taylor Crothers), his wife (Diana Haynes) and their two daughters, Velda (Taylor Novak) and Anna (Celeste Nygren). Then there is all-American woman Sherry Local (Courtney Govan) and shop assistant America (Yisset Gonzales).

The story put together by writer Jessica Dickey closely mirrors the events that occurred in the real shootings and the reactions of the various people involved are at times, exceptionally real. It’s an interesting point but whenever we hear about these sort of occurrences, how many of us think about the family the killer has left behind and what must be going through their minds? I have to say that after a truly amazing performance by Victoria Madigan I have more of an inkling of what someone in that situation must have to endure. The constant questioning not only of herself but from others such as Sherry Local, abusing her in the shops must be at times almost too much to bear – and in this case, the situation is made worse as Carol and Eddie have children. Carol’s performance really stood out as superb – and this was an extremely talented group of actors – and she managed to move me to tears a couple of times as her character came to terms with what had happened and, her part in her husband’s actions.

The play is told in small scenes, each covering an aspect of the killing, either in real time or using flashbacks to illustrate a point. The scenes were interspersed with the singing of hymns as the actors moved scenery around – a really nice touch by Director Gary Diomandes. Despite this moving around I never found myself lost and during the very chilling scene in the schoolhouse – congratulations to Taylor, Celeste and Zachary for bringing that to life so well – I was sat on the edge of my seat totally engrossed in the story I was watching.

I think my only problem with the writing was that I didn’t really seem to increase my understanding of the Amish mindset. The fact that they could not only forgive the killer but arrive at his house to comfort his wife – again this was what occurred in the real event – really threw me and I think there was an opportunity lost to explain more the reasoning behind their act. This was a shame, though it did spur me on to investigate the Amish and the West Nickel Mines School shooting itself more closely.

All told then, The Amish Project is a very well crafted and written. As a piece of writing , it brings a horrible event to life and makes the audience exam how they would react not only as an observer but if they were on of the protagonists in the story. When adding an extremely good and professional group of actors, The Amish Project provides an interesting and at times uncomfortable but engrossing piece of theatre.

The Amish Project Overview
In a premiere performance at The New Wimbledon Studio Theatre, Saint Mary’s University theatre majors from Winona, Minnesota, will unveil how forgiveness and compassion are forged in the wake of unspeakable sadness and grief in a riveting production of The Amish Project.

The fictional work—written by Jessica Dickey—was inspired by a 2006 shooting in a small Amish community in Lancaster County, Pennsylvania. Although the play was developed around the horrendous tragedy that occurred inside a rural schoolhouse, the story richly unfolds as its characters unite in understandable grief—and show unexpected forgiveness.

Qualified theatre majors at Saint Mary’s are studying theatre in London, England, this semester through the Stefannié Valéncia Kierlin Theatre in London Program. Under the guidance of Saint Mary’s faculty, the program will include a variety of classes in theatre, as well as courses focusing on broader enrichment. Students will have the unique opportunity to attend numerous performances at London’s West End, Off-West End, and Fringe theatres.

All proceeds from the production will go to the Wimbledon Civic Theatre Trust.

This play was first put on at The Mill at Sonning in early 2010 - the world has, of course, changed significantly since then, and the script has been … END_OF_DOCUMENT_TOKEN_TO_BE_REPLACED

It’s easy to see why the Orange Tree has brought this one back for another run, less than a year after its first outing here. This is a bold, … END_OF_DOCUMENT_TOKEN_TO_BE_REPLACED

I always loved Choose Your Own Adventure books. Definitely not the Steve Jackson ones where you had to roll dice (who did that?) to find out whether … END_OF_DOCUMENT_TOKEN_TO_BE_REPLACED

Well, there’s a bit about Pablo Picasso’s (1881-1973) paintings in this show that bears his name. But it’s mostly about his approach towards women. … END_OF_DOCUMENT_TOKEN_TO_BE_REPLACED