The Battersea Poltergeist – Live is an attempt to bring the hit podcast phenomenon to the stage. It’s an interesting experiment, but offered little for someone who hasn’t listened to the podcast (perhaps a quarter to a third of the audience by a show of hands) and thin additional pickings for anyone who has. 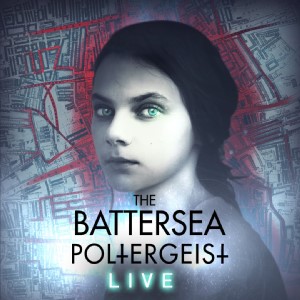 Over lockdown, the podcast became a sleeper hit. Not just in the UK, but around the world, people were disappearing into their headphones, back to 1950s-1960s South London. The attraction? An unexplained haunting that terrorised a suburban family for twelve years, particularly their fifteen-year-old daughter, Shirley. She became the (often creepy) focus of a tabloid obsession at the time.

Has True Horror eclipsed True Crime as the podcast genre du jour? Chances are, you or someone you know was a secret – or not so secret – listener.

The stage show is compered by the podcast host, Danny Robins, beginning with ‘fireside tale’ narration. After ‘Donald’ first appeared in January 1956, the Hitchings family suffered loud banging, objects flying across the room, hundreds of scrawled messages on paper, walls and even the ceiling, and – most terrifyingly – fires which thankfully didn’t prove fatal.

Danny is joined on stage by parapsychologists Ciaran O’Keeffe and Evelyn Hollow, familiar to listeners of the series. He frequently throws to Ciaran or Evelyn for explanations or debunking. The show sets up the debate between #teamsceptic and #teambeliever (and yes, they invite us to take the discussion to social media). Yet to me, this artificial side-taking seems the opposite of a good-faith investigation. Rather than trying to get to the bottom of what happened, this pushes the audience (as with the listeners) into being not sceptics and believers, but to double down into #teamcynic and #teamcredulous.

For me, the most interesting parts of the show are a couple of ‘experiments’ Ciaran sets up to demonstrate potentially relevant psychological phenomena. Most impressively, he shows how it’s possible to get someone to hear a message in (for example) a Led Zeppelin clip played in reverse, simply through suggestion. Whether you’ve come across this in the past or not, it’s striking how effectively it works.

Evelyn’s most convincing intervention (for me) comes when she points out that if there had been no embellishment or, frankly, fabrication of evidence from those involved that would be suspicious in itself. Sure, it’s a great get-out for believers to set aside any amount of tomfoolery, but it is one of the rare moments when it is acknowledged that testimony from humans – fallible humans – is the core of this story.

This show brings in exclusive additional ‘evidence’, but to me, this feels tangential and unlikely to switch anyone’s position. The big reveal is Shirley herself, now eighty, in the audience. She’s willing to answer questions, and this is an exciting addition for the faithful, and I believe exclusive to the London date of the tour. But even this is underused, owing to the decision to announce her presence only after the interval, once audience questions have already been collected. It feels like a trick, even if it’s very reasonable to spare her from uncomfortable questions, directed to her by audience members seizing their only chance to interrogate the woman at the centre of the case.

It’s an enjoyable evening, framed around a spooky tale, and a gentle Halloweentime escape from the house. Perhaps the issue with adapting from podcast to stage isn’t that it’s hard, but too easy. Podcasts are already an intimate format. We feel we get to know the hosts and can follow a careful thread of narrative woven (certainly in the case of The Battersea Poltergeist) with great skill. But rather than delighting in the intimacy of theatre, and the feeling that these people are performing ‘just for us’, I find this less personal as storytelling than walking in the forest with headphones on, when that’s the only activity legally allowed. Then I could be certain, #teambeliever as I was, that whatever podcast I was listening to was being spoken just for me, and only me.

Dubbed Britain’s strangest ever haunting; it was a poltergeist case that spanned an incredible 12-year period. At its height, became a major national news story, with newspaper headlines about strange noises, flying objects, exorcisms and ghostly communication. An attempt was even made to contact the poltergeist on live prime-time TV on the BBC and it was discussed by the Home Secretary in the House of Commons.

At ‘The Battersea Poltergeist – Live’ there will be a Q&A so you can put your questions about the case and the making of the series to Danny and his team of experts!

Are you #TeamSceptic or #TeamBeliever? Be part of the investigation that’s spurred millions of listeners worldwide to become supernatural sleuths.

This play was first put on at The Mill at Sonning in early 2010 - the world has, of course, changed significantly since then, and the script has been … END_OF_DOCUMENT_TOKEN_TO_BE_REPLACED

It’s easy to see why the Orange Tree has brought this one back for another run, less than a year after its first outing here. This is a bold, … END_OF_DOCUMENT_TOKEN_TO_BE_REPLACED

I always loved Choose Your Own Adventure books. Definitely not the Steve Jackson ones where you had to roll dice (who did that?) to find out whether … END_OF_DOCUMENT_TOKEN_TO_BE_REPLACED

Well, there’s a bit about Pablo Picasso’s (1881-1973) paintings in this show that bears his name. But it’s mostly about his approach towards women. … END_OF_DOCUMENT_TOKEN_TO_BE_REPLACED