It is billed as a ‘comedy musical’, and The Bean Spillers delivers on its promise if the audience reactions are anything to go by. For whatever reason, the audience was invited to shout out their bits of juicy gossip all at once, which resulted in no response at all on the first attempt. After all, shouting over someone else is just a little rude, isn’t it? And how on earth are we supposed to hear one another’s gossip if everyone speaks at once? Now, the question of what constitutes ‘gossip’ is set up nicely by a preamble from Sam Cochrane and Alex Prescot, who supply a couple of examples. In short, ‘yes’ to ridiculous and ‘no’ to incriminating. 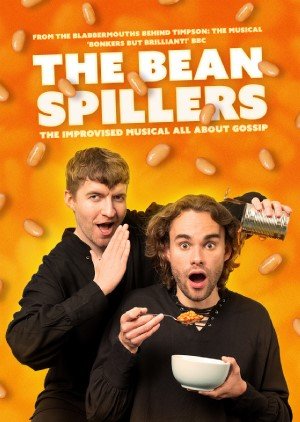 A suitably gossipy storyline having been selected, there are, fortunately, or unfortunately, no further requests for audience participation – this isn’t the stuff of those ‘choose your own adventure’ stories. It is still a remarkable feat, given that the piece of gossip was encapsulated in a single sentence, though this also gave the cast a vast range of opportunities to develop the story as they saw fit. Their duo’s guest at the performance I attended was Ali James, best known (at least to me) for her work with Showstopper! The Improved Musical – the only ‘problem’ appeared to be coping with multiple characters between the three of them. That, and a performance that played to the gallery more than it paid attention to the plausibility of the narrative.

This was, to be fair, part of the show’s appeal: how zany and random could the plot become without leaving the audience so confused that the laughs stop coming? There does appear to be a skeleton framework that the team works with: there’s a rather generic opening number, with story-specific lines inserted in the verses, and in the epilogue, a ‘moral’ is bizarrely teased out from a tale that was largely gloriously immoral, even if it (sort of) redeemed itself by good triumphing over evil and a united front displayed between former rivals.

Jordan Clarke on the keyboard did more than supply musical accompaniment, making worthy interactions as the show went on. Elsewhere, some of the accents may have been questionable (one, in particular, seemed to have embarked on a UK tour of its own). Bonkers but nonetheless enjoyable, the show could have done with a second act. But it’s always better to leave the audience wanting more than to outstay one’s welcome. An energetic and hysterical performance.

Farting at a funeral. Calling your teacher ‘Mum’. Farting at your teacher’s funeral then calling the Vicar ‘Mum’! We’ve all heard some juicy gossip, but have you ever wondered if there’s more to the story?
Following the success of their five-star hit ‘Timpson: The Musical’, Gigglemug Theatre (Winners of The Stage Edinburgh Award) bring you a brand-new improvised musical based on gossip from the audience.

Well, there’s a bit about Pablo Picasso’s (1881-1973) paintings in this show that bears his name. But it’s mostly about his approach towards women. … END_OF_DOCUMENT_TOKEN_TO_BE_REPLACED

It’s thirty-six years or so since Robert Harling wrote Steel Magnolias as a tribute to his diabetic sister, his mother and the group of local women … END_OF_DOCUMENT_TOKEN_TO_BE_REPLACED

Like War Horse and The Curious Incident of the Dog in the Night-Time before it, this National Theatre production centres its storyline on a boy who … END_OF_DOCUMENT_TOKEN_TO_BE_REPLACED

Did you know, The line "Nobody puts Baby in a corner." was voted as the #98 all-time favourite movie quote by the American Film Institute. I only … END_OF_DOCUMENT_TOKEN_TO_BE_REPLACED