True theatre is about testing limits, challenging established thoughts, and pushing boundaries.  If you want an example of what I’m on about then head down to the Prince of Wales Theatre in London’s West End and prepare yourself for something extraordinary. That’s what I did as I prepared to watch The Book of Mormon. 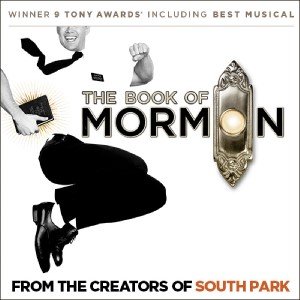 This is the story of two young men – Kevin Price and Arnold Cunningham – who, having finished their training to be missionaries for the Church of Jesus Christ of Latter-day Saints not only now have the tile Elder in front of their name, but also are about to be sent out on their two-year mission to find, recruit, and baptise new members of the Mormon religion.

Elder Price is very devout and has been praying to Heavenly Father to be sent to Orlando, where he hopes to shine.  Elder Cunningham’s wants are slightly different, and he just prays that Heavenly Father will give him a best friend and enable him to do something that makes his earthly father proud of his son. The two young men are paired together and sent out on their mission, to Uganda. On arrival, they are robbed at gunpoint by soldiers of the local warlord, and then have their faith tested as the villagers, led by Mafala Hatimbi and his daughter Nabulungi, tell them the reality of their lives, and who they blame for their woes. In such inhospitable surroundings, can the faith of Elder Price and the overactive imagination of Elder Cunningham be enough to see them through their mission and enable them to spread the word of the Book of Mormon?

A couple of years ago, my two housemates saw The Book of Mormon. One loved it and one hated it, and this reinforced the idea that this is a marmite show. Given the polarity of opinions around the production, not to mention the fact that during lockdown it went through a review and rewrite, I wasn’t exactly sure what to expect. I’m happy to report that whilst I still really dislike marmite, I absolutely loved The Book of Mormon.

From the highly inappropriate opening, through to the highly inappropriate ending, I was totally hooked. Trey Parker, Robert Lopez, and Matt Stone who wrote the music, lyrics, and book, have taken a simple, and quite standard premise of two people forced to work together, complete with the fall-out, recrimination, redemption, reconciliation and jazz hands and made it magical. As far as political correctness goes, even after the recent re-write, it’s still not high on the list of things I’d associate with the show, but it doesn’t matter. In the same way Avenue Q gets away with things, The Book of Mormon does because at its heart is a story about people who are trying to make sense of their place in a world that doesn’t reflect everything they have been taught to expect.

The production is everything you would expect from a top West End show with Scott Pask’s impressive scenic design and Ann Roth’s costumes really adding to the script and music to give the audience a wonderful evening’s entertainment. The songs are wonderful, with each one adding something really powerful to the overall narrative or story of the character singing it. From my perspective, every song is a winner, but my favourites include ‘Hello’, ‘Turn it Off’, ‘I Believe’ and the wonderfully catchy but wrong on so many levels ‘Hasa Diga Eebowai’ which I am still humming under my breath.

From start to finish, The Book of Mormon is a wonderful example of how theatre can challenge the norm and come out on top. The show originally opened on Broadway in 2011 and then in the UK in 2013, and short of another gift from Heavenly Father liver Covid, I can’t see it closing any time soon.

The Book of Mormon comes from South Park creators Trey Parker and Matt Stone, and Avenue Q co-creator Robert Lopez. The Book of Mormon, winner of nine Tony Awards® and four Olivier Awards, including Best Musical for both, follows a pair of Mormon boys sent on a mission to a place that’s about as far away a from Salt Lake City as you can get.

The Book Of Mormon
Prince of Wales Theatre, London

Nikhil Parmar’s one-man show, originally written as a TV pilot, manages to touch on a wide range of themes from Islamophobia to modern fatherhood with … END_OF_DOCUMENT_TOKEN_TO_BE_REPLACED

Handel’s 1738 opera Serse (or Xerxes) is an exploration of power, love and human frailty. King Serse falls in love with the voice of his brother … END_OF_DOCUMENT_TOKEN_TO_BE_REPLACED

Lea Salonga has her fans. She also has some superfans, the ones who yell, “I love you Lea!” at almost every opportunity. If that wasn’t enough, there … END_OF_DOCUMENT_TOKEN_TO_BE_REPLACED

I have no hesitation in saying that the 1952 movie “Singin’ in the Rain” and its 1985 stage version is one of the greatest musicals of all time, … END_OF_DOCUMENT_TOKEN_TO_BE_REPLACED

There are, Maria Caruso was keen to emphasise in a post-show discussion, no wrong answers when it comes to responding to Metamorphosis or even … END_OF_DOCUMENT_TOKEN_TO_BE_REPLACED