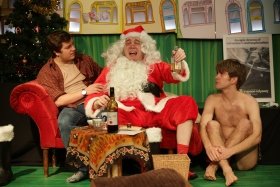 There’s no doubt that Christmas is on its way in deepest Islington as last night revellers packed the King’s Head pub and those of us trying to get into the theatre at the back of the pub had to push our way through the merry throng to collect our tickets. Just trying to get past the crowd was a bit of a trial but it was alleviated somewhat by writer/director of The Boy Under The Christmas Tree, Glenn Chandler handing out mince pies. Then when we did finally make it to our seats, we found a miniature Christmas cracker filled with chocolates on each seat. The other thing we found, was on the theatre’s tiny performance space (you can’t really call it a stage), a fairly small Christmas tree with a very large, nearly naked, boy laying prone next to it (he was far too big to actually lay under it). This was the eponymous boy under the Christmas tree and to the sound of Bob Dylan’s “Knock Knock Knocking On Heaven’s Door” (although not the Dylan version), we were up and running.

It’s Christmas Day and Lawrence Bennett (played by Jamie Loxton) who works in a call centre by day and is a failed stand-up comedian by night, wakes up after a bad comedy gig and a lot of drink, to find what he thinks is a dead body, that try as he may, he can’t revive. There are some funny lines and some knockabout comedy and it seems that we’re in for an interesting eighty minutes or so. But that all changes with the arrival of Bennett’s neighbour from the flat below who’s a doctor and has made sure that Bennett has got home safely the night before. The problem is that Sam Sheldon who plays a number of parts (listed in the programme as “The Visitations”), plays the doctor so broadly and farcically, that it feels as if he’s stumbled into the production from a BBC sitcom from the seventies. Now I’m sure this is what the director wanted but it jarred and put the whole piece out of kilter. Jamie Loxton played his character very naturally (and very well too) and when The Boy (played by stage debutant Daniel Grice) was revived, he was naturalistic too, playing the naïve, Peter Pan like boy, to perfection.

“The Visitations” kept coming with Loxton as a totally over the top policeman and a foul-mouthed northern Santa who had a long and rambling speech that encompassed metaphysics, quantum mechanics, Einstein’s theory of relativity and Schrödinger’s cat! There were echoes (albeit fairly faint ones) of Joe Orton in Chandler’s writing but Orton would have used someone like Kenneth Williams to play “The Visitations” and Williams would have given them the subtlety they cried out for.

Sheldon does return to the marital home towards the end as Bennett’s estranged husband and plays the part with a lot more restraint which works really well in the context of the play. It must be said that there’s some excellent writing throughout the piece which is to be expected from the creator of “Taggart” and some really funny lines such as “What’s a drama school? A place full of people who won’t become actors”. Throughout the play, there are some sharp and accurate movie references – Bennett is a movie buff whose doorbell sounds like something from a Clint Eastwood film. There are also some extremely poignant moments and heartfelt dialogue about relationships, loneliness at Christmas and trust. Although I have my reservations, The Boy Under The Christmas Tree has a lot going for it and could become a perennial favourite but remember a boy is for life – not just for Christmas!

When aspiring comedian Lawrence Bennett wakes up on Christmas morning, after a bad gig and with a king-size hangover, and finds a handsome young man almost naked under his Christmas tree, he wonders if Santa has finally delivered. The beautiful youth doesn’t know how he got there or what his name is or where he came from. The doctor thinks he might have had a bang on the head. The local copper suspects he may be a wanted criminal. As for Santa Claus, he’s on another planet! Join Lawrence and his Christmas visitations in this sexy, surreal and bizarre comedy about how perfection isn’t always where we expect to find it!

Lizzie Boone (played by Selina Helliwell) is in therapy and we are about to find out why. From bullying at primary school to sexual assault in sixth … END_OF_DOCUMENT_TOKEN_TO_BE_REPLACED

An exhilarating evening at the uniquely atmospheric Sam Wanamaker Playhouse. Watching Shakespeare’s Measure for Measure here is the closest one can … END_OF_DOCUMENT_TOKEN_TO_BE_REPLACED

Clive Rowe and Tony Whittle have appeared on and off in Hackney Empire’s glorious pantomimes for the last 25 years. This year, for the first time, … END_OF_DOCUMENT_TOKEN_TO_BE_REPLACED