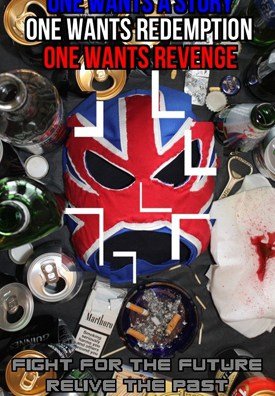 The tricks of the journalistic trade have been addressed in the theatre before. Probably the most notable of recent productions to tackle this subject was the National Theatre’s ‘Great Britain’. In The Britannia Fury, Editor Mr Jameson (Kit Smith) is as brash and demanding as Robert Glenister’s Wilson Tikkel. He answers the phone like a man in a hurry, and his secretary, Stacy (Josie Ayers) has to be quite insistent just to get Jameson to see a freelance journalist, Charlie (Ethan Loftus), who has been waiting for some time with a great idea for a feature length story. Jameson is sold on it, and goes one step further than ‘feature length’ – this will be ‘front page’ news.

The news in question is that a ‘superhero’ who has not been in the public eye for a quarter of a century has been tracked down. We later learn that ‘superhero’ actually means he has abnormal physical strength and fighting skill, and has used this ability for the benefit of the country, taking down terrorists and other miscreants. It does not mean he possesses or possessed some cartoonish power to travel through time or put on a cape and fly across town in seconds.

Charlie, having been commissioned by Jameson, goes off to see Mr Fury (Geoffrey Kirkness), except he doesn’t like being called that, preferring the more informal ‘Brit’. There is some comedy involving the landlady of Brit’s rented apartment (Josie Ayers again), and young Charlie having the door slammed in his face by a Brit fed up of door-to-door salesmen, Jehovah’s Witnesses and political canvassers.

The retired Brit is an angry alcoholic, who only lets Charlie in at all after the journo persistently knocks, and brown-noses him about being a great fan and so on – and because Loose Women will be on shortly, and Brit thought he’d fancy a change of topic from celebrity gossip and sex. And then, a long interview – and thus a long scene – which slows down the pace of the show considerably. But it is here that several themes are explored. As Brit gained notoriety, fame and fortune changed him – he had no qualms admitting that much. Being famous can make a person stronger, but it can also destroy a person. Charlie also tried to discuss the wider consequences of killing people, even if it was for seemingly justified reasons, such as acting in the interest of national security. Brit is dismissive: he had to do what he had to do.

Jameson turns up at the flat, saying that he would like to take some photos. He sends Charlie out with a wad of cash to buy champagne to celebrate this exclusive news story. After indulging in polite conversation for a moment, he suddenly starts strangling Brit, revealing himself to be a serial murderer, and also the person who killed Brit’s wife. In the course of Charlie’s interview, the budding hack finally abandons his softly-softly, David Frost style and confronts Brit – his biological father. This is the first time father and son have met – and the last.

I could go on for some time about absent fathers, and how every terrorist and criminal is still someone’s son, nephew, old school friend or colleague. Despite all the comedy, including the old man’s confusion of ‘vigilante’ with ‘virginity’, there’s no denying this is a tragedy. I came out of the show wondering how many people there are out there who have unresolved issues that are, for whatever reason, too uncomfortable to discuss or confront, and so ironically end up suffering all the more for it, and even hurting others in the process as well.

My fellow theatregoer mused that the show tries too hard to explore too many subjects. I do not concur. I quite like multi-layered productions that go in more than one direction, and if you do too, this is a show to have on your radar.

The Britannia Fury was Britain’s first and only superhero. He put his body and soul on the line in a series of brutal and violent acts.
25 years ago… he disappeared.
One young reporter claims to have found the former crime fighter and plans to set the record straight with story of the year. The elderly Fury wants redemption. Someone wants his head. Never meet your hero’s.

A darkly comic nostalgia trip into a controversial past. All heroes have flaws. All actions have consequences. Discover the great highs and lows of a forgotten icon.’

The descriptions of what happens in this show are so vivid that paradoxically they leave nothing to the imagination – and, at least at the performance … END_OF_DOCUMENT_TOKEN_TO_BE_REPLACED

As theatre productions go this is a memorable, magical experience filled with heart and love and so many tiny thoughtful details, that I’m not sure a … END_OF_DOCUMENT_TOKEN_TO_BE_REPLACED

There are no props at all in Dog, and yet despite a dog, Roy, being very much a key character, the staging and dialogue are more effective than they … END_OF_DOCUMENT_TOKEN_TO_BE_REPLACED

Be astonishing. That’s Derek Jarman’s exhortation to the world at large and - at the end of the show - to this particular audience. And in this … END_OF_DOCUMENT_TOKEN_TO_BE_REPLACED