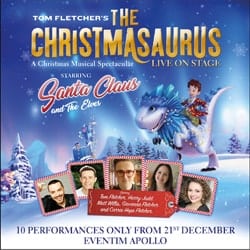 I was excited to be invited to watch the stage adaptation of The Christmasaurus Live On Stage based on the debut novel from McFly star Tom Fletcher. Two of my favourite musicians have composed for original musicals, Bon Jovi’s David Bryan for Memphis and Dan Gillespie Sells for Everybody’s Talking About Jamie, so I was looking forward to seeing what Tom had come up with.

This musical has Tom’s personal stamp all over it not just in the music, or the fact it is based on his novel. On first entering the Hammersmith Eventim Apollo The Christmasaurus feels like it couldn’t possibly fill the massive stage, but then it begins…

People who have seen Tom perform live in concert or watched his YouTube videos will know he is no stranger to making films and talking to a camera, so although I wasn’t expecting the show to start on the screens with “live report from back stage” it felt very apt.

We are quickly introduced to Carrie Hope Fletcher (his sister) Giovanna Fletcher (Tom’s wife) Harry Judd (Tom’s McFly bandmate) and Matt Willis (star of Busted and former member of Tom’s band McBusted) who are all starring in the show.

This musical is not just a musical version of the book, all the above play themselves (a rather funny caricature version) as well as the characters in the book. We are taken from one man, his imagination and a piano, to a full-out Christmas spectacular with full orchestra, accompanied by a massive digital screen backdrop – (in the shape of a T by the way), beautiful costumes, props and an ensemble of huge talents. Special mention for two particular members of the cast: Santa Claus who even though he is very busy this time of year managed to show up, and he can sing too! And the little boy who played William Trundel, who is at the heart of the story. The character William is in a wheelchair and kudos to Tom and the team for casting young wheelchair users to star in the show (there are 3 boys playing this character for different performances). It’s so refreshing to see this represented in the arts.

I know I said I was a fan of Tom – but I hadn’t read his book – it has been sitting on my shelf since last year, so don’t let the fact it’s not a known story to you put you off booking and taking the family to see this wonderful story. I can only imagine that the people who have read the story already are in love with it, and the ones who haven’t will rush out to buy the book – which now comes with the original soundtrack CD.  The score features a range of styles including some funny and moving musical theatre numbers, big Christmas anthems and the distinctive sound from Tom’s band McFly.

I’m not going to tell you the story – go see it or read the book – but I ended up with tears which took me by surprise (I don’t cry that easily). The story is full of hope, important messages and magic. It is without the slapstick of a panto but still has all the comedy and is inclusive like a panto where the audience feel they are part of the show. Matt Willis has the perfect amount of ‘Hamming up’ the acting to make us love to watch him and want to boo him and I must say his acting was spot on for the role. I would love to watch him in more acting roles in the future.

I could go on and on about all the brilliant things this show and cast have to offer but I will just sum it up as the next classic Christmas story/show destined to be around for generations to come.

Tom Fletcher already has an amazing career with years in the music business and being a best-selling author, but I see Tom as someone who could be talked about as a National Treasure in all entertainment. With his talent, personality, drive and enthusiasm is there nothing this guy can’t do?

I hope to see this doing a longer run or arena tour next year.

Following the launch of The Christmasaurus Live at the London Palladium last month, the stage show based on Tom Fletcher’s bestselling book is at the Eventim Apollo London for a limited run from 21st – 28th December 2017. Tom will be starring in this Christmas spectacular alongside McFly bandmate Harry Judd and Busted’s Matt Willis. Tom’s wife and fellow author Giovanna Fletcher and his sister, West End star Carrie Hope Fletcher, will also be appearing in the show. Directed by Derek Bond with stage adaption by Miranda Larson, the show will feature sleigh bells and singing elves, Santa Claus and flying reindeer, music and magic. It’s a tale about adventure, family, friendship and discovering that the impossible might just be possible.

Like most people, I think, I often have mixed feelings about a show I see. Occasionally, though it is rare, there will be a production where … END_OF_DOCUMENT_TOKEN_TO_BE_REPLACED

“The times they are a-changin'”, as Bob Dylan put it - and as a deceased woman’s grandson (Phillip Jones) returns home to attend the funeral, the … END_OF_DOCUMENT_TOKEN_TO_BE_REPLACED

It’s not often that the entertainment tastes of an intellectually snobby middle-aged woman and an action-mad 10-year-old boy align perfectly, but … END_OF_DOCUMENT_TOKEN_TO_BE_REPLACED

Notre Dame is the latest digital production by Threedumb Theatre, live-streamed from The Space in Canary Wharf, London and directed by Stephen Smith, … END_OF_DOCUMENT_TOKEN_TO_BE_REPLACED