I sometimes wonder whether I need a cloak of visibility myself. I could have done with one while changing between Tube lines at London Bridge on the way home – I had to come to a complete stop at one point as people coming in the other direction simply wouldn’t acknowledge anyone else apart from themselves existed. Children on half-term holidays were far more perceptive than their parents, standing out of the way whilst supposedly responsible adults thought nothing of blocking narrow corridors to have conversations at length, forcing everyone else to breach social distancing guidelines just to get to wherever they were going. 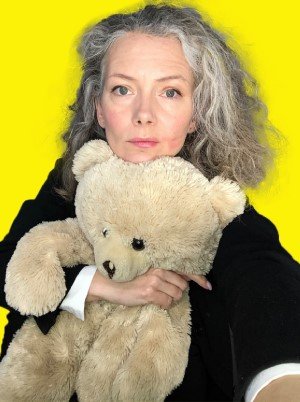 That isn’t the only relatable thing about The Cloak of Visibility. Amy (Sally Vanderpump) balances home and work life, or at least she tries to. I suppose this isn’t the first time a critical incident forces a character in a play to make some major changes to their life and their outlook on life – Amy even manages to find, in her words, a “new tribe”, by which she means a new circle of friends. Mind you, her previous life, in which she was in full flow working in events management, didn’t seem to involve much in the way of downtime, rushing about as many city dwellers do (pre-pandemic, at least), trying to pack too many things into her schedule, and running late as a result.

A subtle sarcasm permeates the monologue – her considerably younger male manager is described in less than flattering terms, and many other observations about her daily routines are detailed enough (without being pedantic) to make them highly credible. This is very much Amy’s story, and hers alone, and there is some scope to expand the narrative to include some perspectives from other characters. There are enough women who cross paths with Amy to have an all-female cast.

Mental health, quite rightly, is explored: the impact of unemployment, for instance, cannot be underestimated, and Amy, rather like Willy Loman in Death of a Salesman, suffers mental degeneration. Life’s curveballs are dealt with grace and good humour, though the show could well have gone on for two hours rather than one (with an interval, of course) – there’s so much about contemporary living that could be explored in a play of this nature. An athlete said something recently on social media, with regards to his training regime: “It doesn’t get easier, you just go faster.” For Amy, whether she realises it or not, it all gets a bit overwhelming.

If there’s anything to take away from this show, it’s that we are all humans, and just because some people can have their cake and eat it, it doesn’t mean everyone can, or even should. The lighting design (Oliver Wareham) enhanced various scenes considerably, and it’s refreshing to see a show that doesn’t jump backwards and forwards between the present day and the past, telling its story in forward chronological order. A witty and perceptive production.

Antandre Productions
The Cloak of Visibility
“People are looking at me! It’s my cloak of visibility
Finally.
A warrior, with a purpose.
All the time I was wearing it the wrong way.
Just turn it round and you are …seen.”
Meet busy, juggling, cool mum, Amy. She’s popular, successful and has mastered the ‘slut drop’. Wearing her cloak of visibility, Amy is a ‘warrior with a purpose’. Pass the gin.
So why is she aimlessly wandering the streets of London?
The Cloak of Visibility is an exciting and thought-provoking one-woman show exploring the pressure, that many women feel, to be seen to ‘have it all’. The play tackles rarely spoken about issues with humour and compassion.

If the audience were to be exposed to full versions of the seventy-four songs listed in the programme, it would be a very long show indeed. I suppose … END_OF_DOCUMENT_TOKEN_TO_BE_REPLACED

How can a play be both charming and devastating? Through its tight script, abundant humour and pitch-perfect performances, 4th Country manages to … END_OF_DOCUMENT_TOKEN_TO_BE_REPLACED

Britain, so a London cab driver once told me, is obsessed with the Second World War, as though it happened just recently. Power Luncheon would seem, … END_OF_DOCUMENT_TOKEN_TO_BE_REPLACED