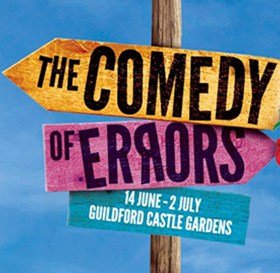 They said it would take place whatever the weather, I was beginning to doubt it, as we finished our dinner in the pub nearby, the rain was almost torrential. We felt quite brave as we set out in the drizzle to enjoy this outdoor performance, but were put to shame by the people gallantly finishing their game of lawn bowls , Francis Drake would be proud!

This is a beautiful setting, sitting under a large oak tree in front of the bandstand, with the castle keep in the background. Fingers crossed, it stops raining as the play begins.

Surprise, we are off to the castle keep to watch a public execution- what fun! The clock struck at least 40 as we waited for everyone to arrive. This change of performance area is most entertaining and an excellent way of keeping children engaged in the action, but can slow the proceedings when not everyone is able to run from one place to another.

Egeon, a merchant from Syracuse has landed in Ephesus, where unfortunately anyone arriving from Syracuse will be condemned to death. He pleads for his life by telling the Duchess of Ephesus his life story. The complicated back story of two sets of identical twins and a shipwreck is delightfully played out in front of the keep; the Duchess is as affected by this as the audience and relents, giving Egeon one day to find the money to pay off his execution. We now proceed back to the bandstand which is to host the market place of Ephesus.

The rest of the play takes place during one day. Unknown to Egeon his twin son Antipholus of Syracuse and his servant Dromio have also arrived in Ephesus, his other twin son Antipholus is a prosperous merchant in the same town. The inevitable confusion occurs.

There are a series of hilarious scenes between different pairs of characters before the Abbess of Ephesus reveals the identities of the two sets of twins and announces that she is Egeon’s long lost wife.

Some people find it hard to believe that a play written over 400 years ago can still be funny, believe me it is; a mixture of slapstick, Punch and Judy and Benny Hill the whole audience were hooting with laughter throughout. The whole cast were brilliant at catching the madcap humour of the play but Matt Pinches as Dromio of Syracuse, Richard Pepper as Dromio of Ephesus and Sarah Gobran as Antipholus’ wife were particularly brilliant.

I love Guildford Shakespeare Company, take a chance on the weather and go and see this play, and no, I am not related to any of the company!

Expect a rush of colour and frivolity as Shakespeare’s most outrageous farce explodes into life at one of Guildford’s most iconic landmarks, staged by Surrey’s award-winning theatre company. THE COMEDY OF ERRORS is one of
Shakespeare’s earliest plays and is also his shortest.

The story revolves around two sets of twins who arrive in the same town, on the same day, completely unaware of the other’s existence; and so begins a whirlwind of confusion as wives, debtors, friends and even the twins themselves, are caught up in the mayhem which ensues.

Guildford Shakespeare Company began producing professional performances of Shakespeare in 2006 and as part of their 10th Anniversary celebrations are returning to the venue where it all began: Guildford Castle Gardens. This time the company will be incorporating the iconic Castle Keep into the show as an austere gallows setting, from which audiences will be promenaded through the ornate gardens to the Victorian bandstand, re-imagined as the play’s market-place.

The Comedy of Errors is directed by CHARLOTTE CONQUEST who created last year’s memorable The Taming of the Shrew and Alice in Wonderland, and is designed by Alice in Wonderland’s PJ MCEVOY. GSC’s actor-managers and co-founders, SARAH GOBRAN and MATT PINCHES will also appear the production.

The cast will see some familiar faces returning to GSC including Simon Nock (King of Hearts in last Autumn’s Alice in Wonderland and Rev Chasuble in The Importance of Being Earnest, 2013) and Morgan Philpott who was last with GSC in summer 2014 as Feste in Twelfth Night and the 5-man Henry V at Guildford Cathedral.

The Comedy of Errors is followed in July by the company’s 30th production, Much Ado About Nothing.