Dan Brown’s bestselling book was never one for giving its secrets away lightly. Indeed, this was, and is, a substantial part of its appeal. The readers have their work cut out, and the pleasure they experience when/if they make it to the end is a little like that of completing a fair but fiendish crossword. 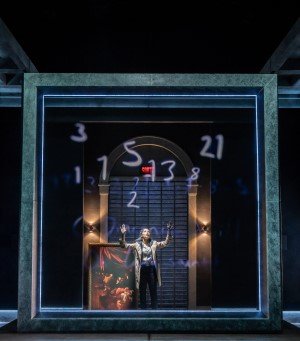 Bringing its convolutions onto the stage was always going to be an ambitious project in its own right, not least because of the massive footprint left by Ron Howard’s 2006 film version starring Tom Hanks as the symbologist Robert Langdon. No wonder Luke Sheppard’s touring production has employed two people for the task of adaptation.
To stick with the puzzle analogy, the challenge here was comparable to that of turning the crossword into a three-dimensional affair. Hence, in this fast-paced version of two hours’ duration, the stage does indeed take on the air of a cube into which all manner of further, unspecified dimensions are clamouring to enter.

As a result, the theatre experience is unexpectedly racier and more breathless than the film. At times this can have the effect of over-compressing what you might call the codeplay of certain sections, even that of the demanding role played by the Fibonacci sequence, in which each number is the sum of the two that precede it, and the so-called Golden Ratio occurs. At the same time such an approach has the benefit of whooshing you through the potentially time-consuming study of Alternative Religious History.

In a storyline which rejoices in presenting the implausible as no such thing, its adapters Duncan Abel and Rachel Wagstaff have pulled off a small miracle of their own in keeping the relationships between the protagonists vital and dynamic. There is a welcome stylistic consistency in their handling of the key episodes, all the way from the murder in the Louvre to the stand-off between Opus Dei and the Priory of Sion over whether Jesus Christ and Mary Magdalene had a child together.

Christopher Harper is an admirable Robert Langdon, the academic symbolist at the heart of the quest, for the most part cool and collected in the tradition of more conventional sleuths; Hannah Rose Caron, a graduate of both the Juilliard and BRIT drama schools, dynamic as his cryptologist colleague Sophie Neven. In a cast full of ferocious commitment to the story’s other-worldly realism, Joshua Lacey is outstanding, and frankly terrifying, as the fanatical monk Silas.

In a show so explicitly trading in imagery and perception, Andrzej Goulding’s video projections and David Woodhead’s ever-morphing set are key players in the business of keeping you wondering where the whole thing will end. Even if you knew already, or thought you did.

Based on the best-selling novel of this century, with over 100 million copies sold, unlock the secrets of The Da Vinci Code in the world premier stage adaptation of the international phenomenon and uncover the truth in the greatest thriller of the past 2000 years.

The Curator of the Louvre has been brutally murdered, and alongside his body are a series of baffling codes. Follow the pulse-racing journey as Professor Robert Langdon, and fellow cryptologist Sophie Neveu (Hannah Rose Canton) attempt to solve the riddles, leading to the works of Leonardo Da Vinci and beyond, deep into the vault of history. With guidance from teacher and friend Sir Leigh Teabing, Langdon and Neveu embark on a breathless race through the streets of Europe. The pair must decipher the labyrinthine code before a shocking historical secret is lost forever.

Further dates to be announced

This play was first put on at The Mill at Sonning in early 2010 - the world has, of course, changed significantly since then, and the script has been … END_OF_DOCUMENT_TOKEN_TO_BE_REPLACED

It’s easy to see why the Orange Tree has brought this one back for another run, less than a year after its first outing here. This is a bold, … END_OF_DOCUMENT_TOKEN_TO_BE_REPLACED

I always loved Choose Your Own Adventure books. Definitely not the Steve Jackson ones where you had to roll dice (who did that?) to find out whether … END_OF_DOCUMENT_TOKEN_TO_BE_REPLACED

Well, there’s a bit about Pablo Picasso’s (1881-1973) paintings in this show that bears his name. But it’s mostly about his approach towards women. … END_OF_DOCUMENT_TOKEN_TO_BE_REPLACED