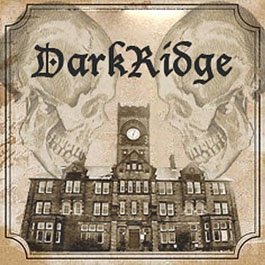 One of the joys of living in the capital is the huge variety of theatre on offer. Not only are there an abundance of different plays and musicals spanning the ages and genres, but also, a plethora of locations in which to hold a performance. London theatre has embraced the pop up culture, with immersive and space-led productions springing up all over the city. One of the more recent theatre companies to grace the genre is Doughnut Productions, whose “conceptual theatre space… attempts to obliterate the fourth wall by putting the viewing audience right in the heart of the action.” The company, formed by Andrew Cooper and Kate Austen in 2014, places the audience in the centre of the room on swivel chairs, from which they follow the action taking place on four stages around the space’s perimeter. It’s a very clever design, which is particularly effective in the current production: Darkridge, a spooky seance story set in an old asylum, because of the tension and chill it creates: the actors appear from all around, heightening the sense of anxiety.

Darkridge, the inaugural play written by University of Westminster alumna Christina Alagaratnam, takes place in 3 Mills Studios, London’s oldest still-surviving industrial centre dating back to the 11th Century. Darkridge tells the story of phoney medium Alec Black, played by Neil Patrick, who makes a living by pretending to conjure up spirits of the dead. He uses two ‘plants’ sitting in the audience to effect his trick – the surly psychology student Amy, (Elena Voce) and the twitchy pill-popping ‘vessel’ Tom (Charlie Tantam). But Tom isn’t such a phoney – he really does hear the voices. And when the trio enter the walls of the old Darkridge asylum, former home to the criminally insane, Tom senses they are in mortal danger.

But will arrogant Alec listen to Tom’s pleas? The Three Mills Studios is a perfect location for the production: as you walk through the cobbled lanes past the Mill’s old pumping station, you are transported back in time. It’s easy to imagine Alagaratnam’s subject of the play, notorious serial killer Freddie ‘The Butcher’ Jackson, roaming the area, the walkways of the grimy East End. The cast use the space well, moving seamlessly from stage to stage, giving the play pace. Neil Patrick as Black is a great storyteller and showman, and the two young leads Voce and Tantam give an energetic performance. Voce is strong and feisty, while Tantam shows his acting range in bringing the vicious Freddie Jackson to life.

Alagaratnam’s play is chilling, with a good final twist, but the show ends somewhat abruptly – it would have been interesting for Alagaratnam to develop the last scene further, as the story’s strands don’t quite link together. Nevertheless, she is clearly a talented writer with a vivid imagination.

Darkridge
Ever wondered what secrets lurk behind the wrought iron gates of Darkridge Asylum? For one night only, sensational medium Alec Black goes behind the padded walls of the Victorian asylum and attempts to do what no one else has done before.

Everyman is one of the earliest printed plays, originally written in Middle English and first performed around 1510. It is a morality play, popular … END_OF_DOCUMENT_TOKEN_TO_BE_REPLACED

After being closed for over two years due to covid, the Arcola Theatre has re-opened with Barney Norris’s love song to the people who raised him, We … END_OF_DOCUMENT_TOKEN_TO_BE_REPLACED

Now in its 15th year, La Clique have firmly established their place on the world burlesque circuit and this year’s London cast bring their infamous … END_OF_DOCUMENT_TOKEN_TO_BE_REPLACED

Warm, funny and lacerating, Satinder Kaur Chohan’s new play opens with a fly-on-the-wall look at the daily attempts women make to be accepted and … END_OF_DOCUMENT_TOKEN_TO_BE_REPLACED