Home » Reviews » The Drought at The Kings Head Theatre

It’s something different, I’ll give it that. In stark contrast to many one-act plays that go at a blistering pace and pack in a considerable amount of content, this one very deliberately spends much of its time having little sense of urgency. The Captain (Andrew Callaghan) and the Captain’s Steward (Jack Flammiger) remain with a ship that ran aground some time ago. It’s not entirely clear how long it’s been since that happened, or exactly when the rest of the ship’s crew left, or precisely why – it’s not so much a case of ‘recollections may vary’, but rather that they most certainly do. 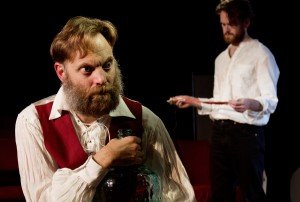 They are, or so they tell a third party, awaiting rescue. The third party in question is a whaler (Caleb O’Brien) – that is, someone who hunts whales – who comes on board having apparently walked for miles on the seabed (yes, really: the show is called The Drought for a reason), and in need of some food and shelter. But as the trio’s dire circumstances come increasingly clearer, it also becomes more difficult to determine who is really telling it like it is. Delirium may or may not be setting in, and accusations eventually run rampant. This might as well have been a parliamentary debate.

It’s the wider applicability of the narrative that makes it intriguing. Just as the Captain insists on remaining in charge of a ship that clearly isn’t going anywhere anytime soon, for instance, it’s quite possible in almost any sphere of life to develop tunnel vision and pursue a goal at any cost, without considering the wider picture and seeing whether one’s efforts and energies just might be better deployed elsewhere.

The sound effects work well, and I say that as someone who is often irritated by them. Because there are moments of quiet and not every second is filled with dialogue, the noise of the wind and whatever is going on outside the cabin (in which the whole play takes place) adds substantially to the eerie atmosphere. The central messages of trusting nobody and doing things yourself if you really want them done are not exactly ground-breaking. Perhaps the play is suggesting that there is such a thing as being too dependent “on the kindness of strangers”, to quote Blanche DuBois in A Streetcar Named Desire.

Set in the days before one could simply telephone or send a message on WhatsApp for help, the men are left to their own devices. Rather like the well-worn Christmas joke about how three wise women might have brought more practical gifts for a newborn baby than gold, frankincense and myrrh, it’s probably reasonable to assume that had this been a group of women, they would have long abandoned ship in search of a wine bar.

Callaghan’s Captain occasionally hisses to the point where I thought of Gollum from The Lord of the Rings. Overall, it’s not the easiest of narrative arcs to follow, and a growing sense that nobody seems to really know what they’re talking about adds to a feeling of despair – even a tad of exasperation. A convincing cast work well together to bring a multi-layered script to life in a production best enjoyed by people who like to see something quirky.

Written by Nina Atesh, the play won the London Horror Festival’s playwriting competition in 2021, and has been championed by Mark Ravenhill as a ‘real honour to see’ along its journey, and described as ‘wonderfully absurd, unique and eerie’ by Graeme Manson (creator of Orphan Black). Nina is a writer of Canadian, Turkish Cypriot descent who has always had an obsession with the sea and the mysteries it brings. Here she presents a dark thriller of desperation, dread and deception. For what would happen to a ship and its crew if the sea disappeared overnight?

Harold Shipman, known to his many patients, family and friends as ‘Fred’, was Britain’s worst serial killer. The official inquiry into his crimes … END_OF_DOCUMENT_TOKEN_TO_BE_REPLACED

Being one of Arthur Miller’s best-made and most challenging plays, The Crucible is also one of his most frequently performed. I was going to say … END_OF_DOCUMENT_TOKEN_TO_BE_REPLACED

To be fair, Linda Lavin called her concert Love Notes, there’s an album of the same name, and that’s more or less what it was about - variations on … END_OF_DOCUMENT_TOKEN_TO_BE_REPLACED

Noughts & Crosses is a euphemism for blacks and whites. The Noughts are the whites and the Crosses are the blacks. In the world of the play, the … END_OF_DOCUMENT_TOKEN_TO_BE_REPLACED

This ‘juke box’ musical offers highly polished, undemanding, feel-good entertainment, showcasing, as it does, 30 songs dating from the 1960s to the … END_OF_DOCUMENT_TOKEN_TO_BE_REPLACED