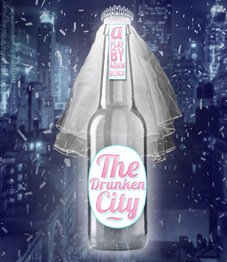 The Drunken City, despite sounding like a Daily Mail headline for any British metropolitan area, is written with such unsubtlety it could only be set in America. The odd British English idiom crept in, however, a possible deliberate ploy to make the production as engaging as possible to a London audience. The usual Americanisms in plays set on the other side of the Atlantic, such as ‘soda’, ‘sidewalk’ and ‘cellphone’, are conspicuous by their absence. There are telling elements, too, of British farce.

An early deep and philosophical monologue by Linda (Kristina Epenetos), one of five female friends – of which only three are portrayed – was cut short by the revelation that she was, as the play’s title implies, strongly under the influence when the thoughts she was expounding on initially came to her. It left me wondering, rightly or wrongly, whether she ought to get hammered more often.

Loud and briskly paced to begin with, there is, interestingly, variation in pace throughout the play as a direct result of drunken behaviour – the stammering, the losing of trains of thought, the complete inability to read between the lines when someone else is trying to be tactful. I can’t help a comparison of this clique of three gents and three ladies with the television sitcom series Friends – with some work, the material presented here has the potential to be adapted for the small screen.

There appear to be quite a few quarter-life crises in progress as the play develops, with confessions and life stories abound. The most touching lines come from Bob (Max Wilson), who elicits audible ‘ahhs’ from the audience on several occasions. One line in particular from the partner-less Bob made a strong impression on me: “I have two pillows [in my bed]… because I am hopeful.” With the more headstrong (and more pissed) characters beginning to encounter difficulties – that pesky little thing called ‘life’ – there’s an almost predictable positive ending for Bob.

There is some effective use of projections to aid with time and place, and an outstanding performance from Michael Walters as the larger-than-life Eddie, bouncing around with energy and textbook comic timing. Sarah Roy as bride-to-be Marnie portrays a character confronting personal circumstances that a less wilful and determined person would have struggled rather more significantly with. Her confidence is frankly enviable, even when this means maintaining a cold front with Melissa (Tanya Lattul), after a cruel and (in my opinion) wholly unnecessary putdown. I had hoped Marnie would stand firm – it’s the principle, y’see – and to my relief nobody could persuade her to change course.

The Drunken City substantially surpassed my expectations: whoever would have thought a bar crawl could reveal so much about life and love and what truly satisfies? The show is neither relentlessly humorous nor relentlessly positive, and this is a good thing. There is demonstrable depth in the more hard-hitting elements of this thoroughly wonderful play. As Frank (a very likeable Josh Hayes) puts it, “Sometimes it’s scary to be honest.” A bold, creative and imaginative show, the Tabard has taken a risk in putting on a production like this, and judging by the audience’s reaction, it has certainly paid off.

And my own verdict? I am reminded of a talkative farmer from rural Kentucky, who, experiencing the sights and sounds of New York City for the first time in his life, started to worry his friends and family by his silence. I can only echo his response when he was asked how he was feeling: “Wow! Just… wow!”

An encounter with a handsome stranger is enough to stop anyone in their tracks. But for Marnie on her bachelorette party – it’s something more. Pink drink fuelled and with excited ‘whoo whoo-ing’ bridesmaids in tow, will this chance encounter ultimately force her to reconsider her impending nuptials?

Following a hilariously eclectic group of friends on the bar crawl to end all bar crawls, Bock’s The Drunken City is a wildly theatrical take on what it takes to remain true to yourself in the pursuit of love and happiness.

Shoes, one would have thought, are fairly recession-proof. The problem for Charlie Price (Joel Harper-Jackson, reprising the role he previously played … END_OF_DOCUMENT_TOKEN_TO_BE_REPLACED

The descriptions of what happens in this show are so vivid that paradoxically they leave nothing to the imagination – and, at least at the performance … END_OF_DOCUMENT_TOKEN_TO_BE_REPLACED

Although not entirely perfect, this staging – the first ever in the UK – of Pablo Sorozabal’s Zarzuela (Spanish Operetta) is brilliant, atmospheric, … END_OF_DOCUMENT_TOKEN_TO_BE_REPLACED

As theatre productions go this is a memorable, magical experience filled with heart and love and so many tiny thoughtful details, that I’m not sure a … END_OF_DOCUMENT_TOKEN_TO_BE_REPLACED